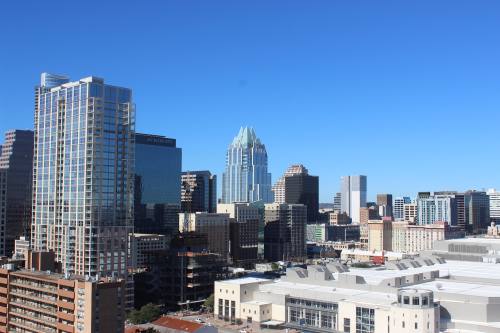 The Austin Convention Center is in many ways outdated, undersized and underused by locals, but has the potential to be an active, signature piece of Austin’s rapidly changing downtown, according to a comprehensive report released March 29 from the University of Texas Center for Sustainable Development.

The question of whether to expand the convention center—constructed in 1992 and expanded in 2002—has been on the table since at least 2015, when a master plan was published by architecture firm Gensler & Associates Inc. City Council posed the question to a task force in 2017, and Mayor Steve Adler, proponent of expansion, set it as the centerpiece to his 2017 “Downtown Puzzle” proposal. City Council members have questioned the worth in spending hundreds of millions of dollars on an expansion.

The UT study was commissioned by City Council in December 2017 to provide a third-party examination of the design feasibility and economic impact of a potential expansion. Building on existing ideas and coming up with their own, the team of academics produced five scenarios, ranging from the status quo, to construction of a new convention center across Trinity Street and a demolition of the existing building to create “creek-to-creek connectivity” in Downtown Austin.

“You have to look at the convention center, in my opinion, as not one isolated problem, but something that is part of a larger ecosystem in which we can be strategic and get benefits across the city,” said Dean Almy, director of the graduate urban design program at the UT school of architecture and principal investigator on the report.

In coming up with design scenarios and feasibility, the study considered a few accepted truths about the Austin Convention Center: the convention center is turning away business because it is undersized; the design is outdated and behind peer cities such as Nashville, Seattle and Denver; convention centers operate at a loss but provide stimulus to the local economy; and the current design has created a mobility issue in the heart of the Downtown Austin. However, it aimed to answer the question of what responsible stewardship of the convention center would look like.

Downtown placemaking was a focal point of the study. Considering the development going on at the Seaholm District to the west, Plaza Saltillo and Sixth Street to the east, along Waller Creek to the north and the South Central Waterfront District to the south, the UT team looked at how the Austin Convention Center could not only link these four “vectors of urban development” but become activated and used by Austinites.

The first two scenarios assume no changes to the convention center, with Scenario 2 projecting some market-rate development that could occur around the area. Scenario 3 builds off Gensler & Associates Inc.’s idea from 2015 that the existing center is left as is and a new arm to the convention center is built across Trinity Street to the west. This would be estimated to cost $540 million.

The last two bring fresh ideas to the table. Scenario 4 is a two-phase plan that also envisions an expansion across Trinity Street. Although it would maintain the 2002 expansion building, the 1992 original convention building to the south would be demolished. In its place would go a new, smaller convention facility, along with public space and pedestrian connectivity through 2nd Street by way of a “covered retail galleria” through the facility, essentially linking Shoal Creek and Waller Creek. The whole project is estimated at $1.1 billion.

Scenario 5 is similar, except it proposes to demolish the entire existing convention center replace it with a taller, more compact facility and construction of even more public space and east-to-west pedestrian connectivity, at a total cost of $1.27 billion. The fifth scenario also imagines Trinity Street becoming a “festival street” between the two new convention facilities.

Scenarios 4 and 5 imagine the area transforming from simply a building that stretches across a few blocks, to an “Austin Convention Center District.”

The UT team made it clear that the existing convention center could not be touched without a new facility already in operation, as the cost of shutting down the convention center for construction would be too high.

Convention centers, as a rule, lose money, said Allan Shearer, the associate dean for research and technology at the UT school of architecture. However, the consistent jolt it provides the local economy is where the city sees its return on investment. The leisure and hospitality industry, of which the convention center is a major contributor, currently makes up 15 percent of the Austin economy.

Jake Wegmann, assistant professor of community and regional planning at the architecture school said the convention center’s ability to attract hundreds of thousands of visitors per year trickles down into hundreds of service industry jobs—jobs which, he said, do not require four-year degrees, yet offer upward mobility and career paths, such as hotels. For businesses, Wegmann said conventions often bring visitors during weekdays, which otherwise would be the slowest time for business.

More visitors at least mean more hotel rooms are being filled, which adds to the hotel-occupancy tax the city is able to collect each year and invest back into programs such as historic preservation and cultural funding. As part of the aforementioned “Downtown Puzzle,” Adler said hotel executives who supported an expansion had agreed, in the event of an expansion, to levy an additional tax on their guests, the funds from which would go back to the city for homelessness initiatives.

How an expansion costing upwards of $1 billion would be paid for remains to be seen, and the report does not attempt to make any funding recommendations. The UT team will present its report to the public on Tuesday, April 2 at 9 a.m. at the Central Library.