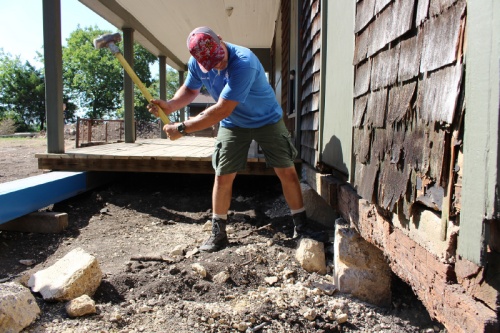 Crews prepare the Collinwood House in late August for relocation to a nearby property in Plano owned by the Haggard family.

Construction is underway on a long-awaited public park in Plano that is expected to open near the end of 2019 after the city cleared the last of nearly a decade's worth of obstacles.

The 120-acre site of the future Windhaven Meadows Park is located south of the intersection of Spring Creek and Windhaven parkways, including the plot of land that had long been the site of the Collinwood House, a 19th-century home that is thought to be one of the oldest standing structures in Plano.

Plano voters first approved funding for the park in a 2009 bond referendum, but the project was slowed in part by deliberations over what to do with the Collinwood House. Now that park development is underway nearly a decade later, city officials say the future Windhaven Meadows Park will serve surrounding neighborhoods and will also attract residents from across the city.

But the start of the project was stalled in recent years as the city worked to determine a path forward for relocating the Collinwood House, a task that the Haggard family—which has deep historic roots in Plano and owns several large, undeveloped properties in the city—agreed to take on.

And when the Collinwood House relocated to the nearby Haggard farm property on Sept. 19, construction on the 120-acre Windhaven Meadows Park was officially underway.

After crews complete their work on the first phase of construction, Windhaven Meadows Park will offer visitors amenities, including a dog park, a pavilion area and an all-abilities playground.

Jeff Johnston, a city of Plano landscape architect and manager of the Windhaven Meadows Park project, said the city has always planned to keep the park open with passive trails and green space.

The city planned for one of those elements in the northern portion of the park to be a woodland exploration playground, but that changed when Liberty Mutual offered in December to donate $1 million to construct a playground that would accommodate children with disabilities.

Johnston said the playground will be physically accessible to caregivers and people in wheelchairs, and will also include a stream bed-style splash pad.

The playground will also be designed to accommodate children with autism spectrum disorder who may have different sensory needs than other children.

The playground will be outfitted with tactile, visual and auditory features geared toward these children, the city said. Play equipment will use soft, rubberized surfaces.

The dog park will be one of three dog parks within city limits. The only dog park currently open to the public is the Jack Carter Dog Park near the intersection of Spring Creek Parkway and Custer Road. The Plano City Council also awarded on Aug. 27 a $1.8 million bid to construct a dog park on the southern portion of Bob Woodruff Park, which is expected to be open by the end of 2019.

And with over a year’s worth of construction ahead, park planners hope to ensure they maintain the ecological integrity of the park while still offering high-quality amenities to residents.

Some of the initial work crews will be tasked with includes surveying the site’s landscape for potential safety hazards, such as weak or damaged trees, as well as cleaning up some of the undergrowth that has built up around the ponds.

Despite spending an initial $10.5 million for the construction of the park, city officials hope to keep its environmental impact as minimal as possible and mirror some of the same natural qualities of nearby Arbor Hills Nature Preserve.

“[Arbor Hills] is similar in the effect that we are trying to reduce our footprint as far as the development of the park,” Johnston said. “All of our trails are going to be cut in place. The only thing we are disturbing is where the actual elements are going. There’s going to be some areas where we have to do some grading and things like that. [For] the majority of the park, [we] are trying to be as low impact as possible.”

Part of constructing the trails in the park includes linking them with Plano’s existing trail network, Johnston said. A draft of the parks and recreation department’s master plan refers to potential obstructions in the continuity of the trails meandering through Windhaven Meadows Park.

“In the southwestern part of the City, the Gleneagles Country Club Golf Course imposes a barrier to connecting White Rock Park Trail to Windhaven Meadows Park and Legacy Trail to the north,” the master plan reads. “The current Bicycle Transportation Plan shows this as a side path along Willow Bend Drive, but right-of-way is limited.”

Johnston said work in that southern portion of the park will be part of a future construction phase.

In the meantime, construction for the northern portion of the park is soon to begin after the Haggard family entered into an agreement with the city to move the Collinwood House onto one of their properties.

A bond proposition in May 2017 that would have funded the preservation of the Collinwood House and allowed for it to stay on Windhaven Meadows Park grounds narrowly failed to pass.

But in July, the Haggard family agreed to move the structure onto one of their nearby properties, ending concerns from some historical advocates the house would be deconstructed.

Clint Haggard, a member of the family that moved the house, told Community Impact Newspaper in late August that the family has not determined how exactly the historic house will be incorporated into the future development at the nearby Haggard farm property.

Harold Sickler, the chair of Plano’s heritage commission, says Haggard has proven his capabilities in preservation projects in the past.

“Clint Haggard in this particular situation does have the means and the track history of being able to take a project and preserve it, and that was very much of what we were interested in,” Sickler said.

“So much development is happening in Plano,” Mittal said. “I think there are very few historic buildings or heritage related-aspects that are left over in Plano. So, we feel like it’s great if they can be preserved so that they, in other terms, help tell the story of Plano—how Plano has evolved from the 1800s to now where we are.”

The city of Plano provided the video of the Collinwood House removal.