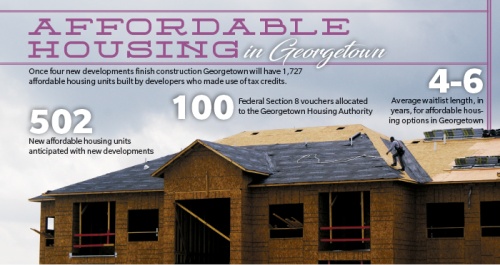 The 108-unit Live Oak Apartments affordable housing complex is under construction at 4121 Williams Drive and expected to finish before the end of 2018.

More privately developed affordable housing units are being built in Georgetown, but officials involved say it may still not be enough to meet the community’s needs.

In addition to the more than 500 new affordable units in the pipeline, Georgetown staffers plan to collect information on citywide housing to create a new “housing toolkit” as part of the city’s update to its 2030 Comprehensive Plan to help officials make policy decisions. Meanwhile, Williamson County is considering a partnership with the Texas Housing Foundation to provide affordable units for county residents separately from projects under private development.

“One thing I think many communities are facing is a decrease in available affordable units,” she said. “Workers’ wages aren’t increasing like the cost of housing is increasing.”

Through housing vouchers, public housing complexes and privately run developments that receive tax credits as well as a new study to shine light on the gaps in Georgetown’s housing supply, Watkins hopes the city will be able to remedy residents’ affordability concerns.

“[The lack of affordability] is something that people are dealing with in our city, in our state, nationally,” Watkins said. “That’s something I’m definitely grappling to try and understand [myself].”

City Council approved a $263,160 contract March 27 with Austin-based Freese and Nichols Inc. for services related to the city’s comprehensive plan update, which is anticipated to finish by fall 2019. As part of the update, the city’s housing toolkit will serve as a reference point for future city policymaking and include an inventory of available housing as well as related demographic information, Watkins said.

“I think that when we complete this project, we’re going to have a lot of great information,” Watkins said. “If we’re out of whack one way or another, that’s information City Council can use to make decisions.”

Williamson County commissioners began discussions in February on a partnership with the Texas Housing Foundation, an independent housing authority based in Marble Falls, to bring new affordable options to the county. The foundation operates affordable properties in Georgetown, Round Rock and Liberty Hill. A vote on the partnership is expected in April.

Mark Mayfield, the foundation’s CEO, told commissioners that a partnership with the county would streamline the process of bringing more affordable housing developments to the area and provide a layer of transparency.

“Most of the people we house are people who work in the retail establishments and work in restaurants or work in schools,” Mayfield said during a Feb. 9 Commissioners Court meeting. “They’re necessary, vibrant parts of the community, but they can’t buy the [expensive] homes.”

Nikki Brennan, executive director of the Georgetown Housing Authority, said the city is struggling to keep up with the need for affordable housing.

“We just need the community to understand that there is a huge need for affordable housing,” Brennan said. “It’s getting better, but it’s still there.”

Through state and federal grants, the GHA can provide a limited number of affordable housing units for residents, whether it be through the authority’s own public housing developments or in the form of housing choice vouchers.

The authority operates two public housing developments: Stonehaven Apartments at 210 W. 18th St., and Shady Oaks at 501 E. Janis Drive. The waitlist for a unit at either one lasts between two and four years, Brennan said.

According to HUD, in the Austin-Round Rock area, which includes Georgetown, market-value rent for a two-bedroom apartment is $1,251. Finding an apartment at that rental rate can be difficult, Brennan said.

Georgetown residents in search of affordable housing can also look to developments known as tax-credit properties. In exchange for renting some or all of the apartments to tenants at a restricted rental rate, those properties can receive tax credits to offset development costs.

The salary threshold for tax credit properties is higher than the voucher and public housing programs, Watkins said. Participants must generally make between 50 to 80 percent of the area median family household income for the Austin-Round Rock area, estimated at $81,400, according to HUD.

A person making 60 percent of the median income for the area would bring in about $48,840 a year. At the average tax credit development in Georgetown, that person’s rent would cost $800 a month for a one-bedroom unit, Brennan said.


Getting a Section 8 Voucher

In Georgetown, the Section 8 voucher program is in particularly high demand: The Georgteown Housing Authority is no longer even accepting applications for the waitlist. The last time it was opened in 2011, the authority received 600 applications in eight hours.

Now seven years later, 392 people who signed up in 2011 remain on the waitlist for vouchers, said Nikki Brennan, the housing authority’s executive director. On average, about six existing vouchers are made available for new applicants each year. Existing vouchers are typically freed up when a current holder dies or commits a Section 8 violation and is required to leave the program, Brennan said.

“The city did well and approved tax credit properties—they approved 310 units in 2016—but that’s not near enough,” Brennan said. “We need probably 2,000 more.”

To submit an application for housing tax credits, a developer must obtain a resolution from the city acknowledging that the city has more than two times the state average per capita amount of housing tax credit units, according to GHA board documents.

Surrounding cities in Williamson County have ratios far below the state or Georgetown average, with Cedar park having 0.014 tax credits per person, Round Rock having 0.007 per person and Pflugerville having 0.019 per person.

“Unfortunately for the folks I talk to here, we really don’t have any substantive streamlined way for them to get into housing, whether that be emergency or affordable,” he said. “We don’t have the inventory to meet a need.”