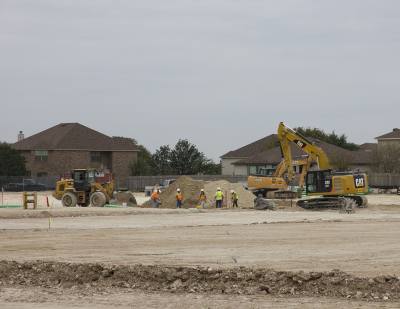 The future Merritt Heritage Senior Village at 4700 Williams Drive celebrated the start of construction Nov. 15. The 244-unit complex will have half of the units considered affordable, or set aside for tenants with incomes at or below 60 percent of the area median income.

Two affordable housing developments have broken ground this year in Georgetown, and additional developments that make use of state tax credits for income-restricted housing are on the way.

The future Merritt Heritage Senior Village at 4700 Williams Drive celebrated the start of construction Nov. 15. Merritt Heritage will feature 244 units ranging from one to three bedrooms in size with half of the units considered affordable, or set aside for tenants with incomes at or below 60 percent of the area median income.

Colby Denison of Denison Development and Construction, the project’s developer, said Merritt Heritage is expected to finish construction and be ready for tenants to move in by December 2018.

Merritt Heritage will feature amenities such as a movie theater, a gym, a salon and spa as well as shuttle service to allow residents to travel around town, said Jackie Weissmiller, vice president of property management for Veritee Property Solutions, which will manage leasing and other aspects of the new development.

Georgetown City Council approved two resolutions Nov. 28 that will let developer Pedcor Investments apply for 4 percent noncompetitive state tax grants for its proposed affordable housing project in the 1500 block of NE Inner Loop. Called the Residences at Stillwater, the development will include 192 units, all at affordable rates.

The council voted 5-2 to approve the resolutions after discussion that rekindled similar debate from 2016, when council members chose to revise the city’s process for overseeing and vetting potential affordable housing developers by requiring developers to hold public meetings and meet certain zoning standards.

Approval of both resolutions was necessary before Pedcor can apply to the state for tax credits for the Residences at Stillwater development. The tax credits can offset building costs and other project expenses.

Council Member Steve Fought, who opposed approving the resolutions along with Council Member Ty Gipson, said before the vote that the city should not shy away from addressing affordable housing, but he disagreed with the current approach. He said he believes Georgetown has taken on a greater burden in allowing affordable housing developments than neighboring cities in Williamson County and elsewhere in the region.

Along with its new proposal, Pedcor broke ground in July on Live Oak Apartments, an income-restricted apartment complex at 4121 Williams Drive. The 108-unit complex is expected to finish before November 2018, and preleasing should begin next summer, according to Pedcor.

An additional development, the 102-unit Kaia Pointe complex, has been approved for 104 Gatlin Creek Drive but has not begun construction. Kaia Pointe will offer 78 percent of its leases at affordable housing rates, according to Sagebrook Development, the project’s builder.

Georgetown officials plan to update the housing element of the city’s comprehensive plan in 2018, said Susan Watkins, the city’s housing coordinator. The update will look at Georgetown’s housing growth scenarios and future demand, she said.

Watkins said access to affordable housing has been a top issue for a number of cities in Central Texas and around the U.S., particularly in areas that have seen recent population growth.

“Almost any community is dealing with the issue of affordability,” Watkins said.

Pedcor’s request for the Residences at Stillwater was the first request made to City Council under the city’s new guidelines for developers of affordable housing projects who intend to apply for state housing tax credits.

Georgetown requires developers to hold public meetings with residents living near the locations of proposed projects. Developers must also undergo a zoning review by the city, meet a series of deadlines to submit information, and organize meetings and provide the city with data on current tax-credit inventory, according to the city’s rules.
SHARE THIS STORY