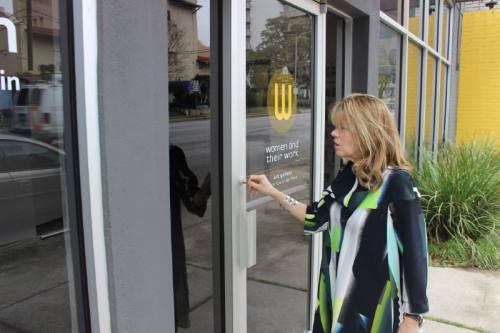 Since 1995, Chris Cowden’s nonprofit arts organization has hosted mixed-medium art exhibitions in a rented space just south of The University of Texas at Austin. But Women & Their Work’s lease at 1710 Lavaca St. is due to expire in December 2020 with no renewal option, Cowden said.

City and creative sector leaders hoped to develop programs protecting art and music spaces from similar displacement. However,  Women & Their Work and others in Austin’s $4.35 billion creative sector continue to move away from the urban core because of various market factors, members of the creative community have said.

The curtains have closed for popular theaters such as the Salvage Vanguard and the Off Center in recent years; local music institutions such as the Austin Music Hall met the wrecking ball in 2016, and Threadgill’s World Headquarters announced it is closing in 2018. The local scene has also recently lost Red 7, Headhunters and Ruta Maya.

Community members and city officials call the situation a crisis and acknowledged that government intervention is necessary. Two years ago, Austin Mayor Steve Adler introduced his plan—dubbed the Music & Creative Ecosystem Omnibus Resolution—to save the creative sector. Members of Austin’s art and music communities say the initiative has yielded few results, and the programs suffer from a lack of funding and a slow bureaucratic process while leases continue to expire.

As the clock ticks for many local venues, new efforts are underway to counter the real estate market and preserve the vanishing venues. To succeed, many say it will take an unprecedented community effort.

City officials have cited Austin’s creative culture as a competitive advantage in attracting major companies such as Facebook, Google and Apple.

Yet, in a 2016 survey from local arts advocacy group Austin Creative Alliance, 122 of 230, or 53 percent, surveyed art and music venues do not expect to renew their current leases. The survey concluded that the demands of the real estate market are moving faster than the creative community’s ability to secure the capital and financing needed to stay in place.

John Riedie, CEO of the Austin Creative Alliance, said that although development is producing space for rent, the market demands tenants that can produce immediately, which lends itself to commercial retail, expensive restaurants and residential properties. He said cultural spaces have more of a long-term return.

Eventually all art and music venues will be eliminated should the current market continue its trajectory, Adler said.

“If Austin were to lose all its artists, it would still be a ‘nice city’ but it wouldn’t be Austin, Texas,” Adler said. “It’s existential. Preserving that element is fundamental to preserving who we are as a city.”

Riedie said other cities have used economic growth to the creative community’s advantage, but it takes public-private partnerships—something he said Austin’s government has been slow to embrace.

“We’ve yet to take advantage of the opportunity that all this new money and audience brings us,” Riedie said. “If we could work together, we could bring these new resources towards the arts.”

In February, the Austin City Council took a step toward that. Passing its first major measure since the omnibus resolution, Council acknowledged the venue and affordability crisis faced by the creative community and outlined a fresh path toward solutions.

Riedie said the trust would work through a partnership with the government but remain independent and free from the slow bureaucratic process that stalled other programs. Adler blamed the inconvenient but necessary bureaucratic crawl for holding up
creative funding proposed through
hotel-occupancy tax programs.

The resolution also highlighted potential changes to the city’s economic development policy, which currently forbids incentives to mixed-use development projects with a retail component. City staff will update economic incentive programs so that fees can be waived for projects that include creative spaces. The city will aim to identify local funding mechanisms to buy down rent for these spaces, according to the
resolution.

The city will also explore a microloan program that gives Austinites the ability to invest and take ownership in local music and art venues. Early descriptions of the program cited success in Australia and Tasmania, but did not point to any examples of success within the United States.

Clinton Sayers and Paul Byars, native Austinites and partners in Sayers Real Estate Advisors, say evidence shows that cultural assets attract new residential and commercial development next door. While the new development realizes the benefit of the traffic generated by a cultural asset such as a theater, the new development often increases property values and contributes to the financial turmoil of the theater.

Although many creative spaces in Austin are standalone venues, Sayers and Byars said the future is in mixed-use buildings, where residential, commercial and cultural spaces can feed into one another’s success.

Sayers said that many developers do not consider cultural space a highest and best use for the ground floor of mixed-use development as restaurants or commercial retail often bring the best return. He said the cultural space would drive demand for the residential units above it and generate foot traffic for the commercial space around it, creating reciprocal benefit for the entire project.

“If you look at home values in proximity to culture, they are greater,” Byars said. “This is that same concept but on a one-building level.”

“Let’s not kick the cultural assets out; they are why we are here,” Sayers added. “It is part of Austin’s brand, and we need to take that with us.”

Adler said the community should continue its search for new ideas, but he acknowledged the limited amount of time.

“There are a lot of people here who recognize [the creative sector] as being extraordinarily important, and I know it’s taking longer than we would all like,” Adler said. “[Lease deadlines] and the potential loss of [art and music venues] in coming years weighs heavy on all of us.”