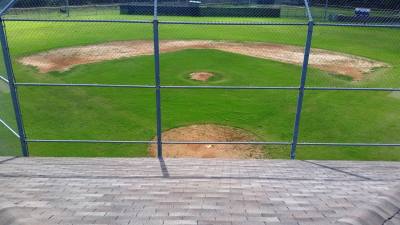 Austin Roofing and Construction donated a roof to a baseball facility in Garrison Park in November.

A Garrison Park baseball facility is sporting a new rooftop thanks to a Austin Roofing and Construction donation made in November.

In 2016, spouses and co-partners Tim and Christine Bowen of Austin Roofing Company implemented Austin Gives, a program through the Austin Chamber of Commerce where businesses donate 1 percent of their total gross income back to the city of Austin. As a result, the company donates at least two roofs a year to residents in the greater Austin area who might not otherwise be able to afford a new roof but are in dire need.

The goal behind implementing the Austin Gives program, Bowen said, was to bring honest roofing work to families in Central Texas. She said Texas does not require licensing for roofing contractors, which opens the community up to scams.

“I hear so many roofing horror stories,” Bowen said. “We wanted to create a program that could fix this and instead it turned into opening up an opportunity for community members who really need a new roof.”

The company was contacted by little league team South Austin Optimist to place a new roof on the building located right next to the baseball field at Garrison Park. League president Ric Castaneda was extremely grateful for the support.

“It is heartwarming to realize that there are people such as your company that is willing to help others,” Castaneda said in a testimony to the company. “To that we say, thank you, Garrison Park, for being here in South Austin with barbecue pits and an awesome pool.”

The Garrison Park facility roof was the only donation made by Austin Gives in 2017, Bowen said, so the pair is striving to donate three roofs in 2018.
SHARE THIS STORY