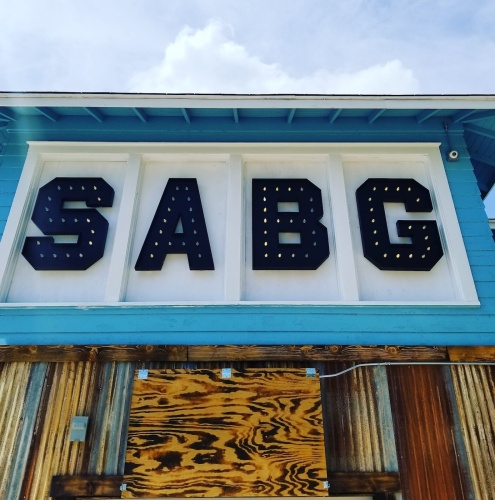 South Austin Beer Garden is located on Manchaca Road and opened this spring after numerous delays related to permitting.

Builders in the Austin area are well aware of criticism from locals who have said private and commercial projects take much longer to complete than originally proposed. Similarly, city of Austin officials said they know they are frequently criticized by developers for having a lengthy and sometimes overwhelming permitting process.

Businesses such as South Austin Beer Garden, for instance, have experienced significant delays. SABG first discussed delays with Community Impact Newspaper in 2016, then already a year past when plans for the business were announced. SABG finally opened in May of this year.

Josh Bumb, an owner of Moontower Saloon, located near SABG, said while permitting lasted months rather than years for his most recent South Austin venture, Vincent’s Sports Pub, costs related to permitting towered at around $200,000. The restaurant and bar opened in October 2018, almost a year after Bumb’s original goal of opening in November 2017, which he told Community Impact Newspaper during early stages of development.

“Everybody on our end will tell you it’s exorbitant price that can break you, and it simply takes too long,” said Bumb.

While developers have complained of slow processing for years, the 2015 Zucker Report made the criticism official. The 800-page report by independent consulting firm Zucker Systems concluded the city should invest $4.25 million to improve Austin’s planning and development review department.

In 2018, Rodney Gonzales, then director of the newly branded Austin Development Services Department, told Community Impact Newspaper the report was “a personal blow” to development staff.

Since the Zucker Report’s release, the city has made changes initially spearheaded by Gonzales, who now serves as assistant city manager. The development services department was structured after the report’s release, along with the creation of an expedited building plan review option. The option allows developers to meet with representatives of all departments relevant to permitting at once.

According to Brenda de la Garza, the consumer services manager for the expedited review, this option, which includes added fees compared to the standard building plan review process, was a response to consumer feedback received through Zucker Systems’ survey.

“Point blank, our customers wanted an alternative path, even if it would cost more money,” de la Garza said.

James Stinson, a value-add contractor with Texas Site Development who specializes in “taking the rocket science” out of permitting and development for laymen, acknowledged that a complicated process favors the work of people such as himself who help others navigate the system. He said he still believes, however, that the time it takes projects to complete zoning and permitting—often 12 to 14 months, he said—is exorbitant, although not unexpected due to a limited staff.

“Permitting really comes down to Travis [County] and the city of Austin and their willingness to staff those positions,” he said.

With a lack of staffing, certain improvements are only available at a premium, such as the expedited review option, which de la Garza said is a source of research for the standard review process as well. She said it is teaching the various departments tied to permitting to “work together and collaborate, not get in each others’ way.”

The opportunity to have a live meeting with representatives from each department can cut down a permitting cycle from 37 days to several hours, but with high demand, representatives for a project may have to wait around a month for a meeting with the expedited building plan review team, according to de la Garza. Long meetings mean less opportunities to make appointments.

In 2018, the expedited option’s first year, de la Garza said the team reviewed 720 permits, a fraction of the many thousands that were submitted to the city. With such volume, the expedited option simply is not widely available, although de la Garza said it clears larger and more complex projects from the standard review queue, freeing up space for standard review of smaller projects.

The view from different perches

For small-business owners, additional fees associated with an expedited process can be prohibitive. However, with the standard review process, permitting delays can also create substantial costs and losses.

“With almost every project, you try to buffer in some time for the extended permitting process,” Bumb said.

Stinson said navigating the process was difficult for both homeowners and small-business owners, especially those with little land-development experience. Hiring engineers and contractors who have the right background and relationships with city staff is key, he said.

“It’s really tough as a greenhorn business owner to go in and find the right people,” Stinson said.

In response to Austin’s housing boom, Stinson said a number of individuals have marketed themselves as development experts. However, he said some may not have experience with the specific area that an owner seeks help with, especially if they are not from the area, and may further bog down the process.

Overall, Stinson said he believes the city is making strides toward transparency by applying lessons learned through the expedited process, for example.

Geoffrey Tahuahua, the vice president of policy and government affairs for the Real Estate Council of Austin and a former Dripping Springs City Council candidate, has assisted developers with permitting and has at times been a sharp critic of Austin’s process, but he agreed the city seems to be moving in the right direction.

“It’s probably going to take [time] to see changes, but the important thing is that we’re having those conversations,” Tahuahua said.

In the neighboring city of Sunset Valley, with a population of hundreds as opposed to Austin’s near million, the standard building plan review resembles Austin’s premium-priced expedited one, but at a lower price point.

“Reading the [land development] code is our job,” she said. “We’re supposed to walk them through it.”

Similarly, in neighboring Dripping Springs, Tahuahua said permitting staff can be more “creative and flexible” due to their relative size and demands on staff.

Permitting duties in Dripping Springs are currently divided between two departments—planning, which handles site development, and building, which handles building plan review—but building official Sarah Cole said she and the site development head are considering proposing a merger of these areas. As it stands, Dripping Springs’ process is similar to Sunset Valley’s, with plans reviewed by all departments before comments are returned, Cole said.

While Austin’s department is difficult to compare to these cities’ due to size and scale, the systems of neighboring cities’ departments are relevant, Tahuahua said.

“There are some developers whose whole business plan in the Austin area is to not build in the city of Austin,” he said.

Other Austin-area cities are taking notice of those developers’ frustrations. Philip Ellett, a Sunset Valley City Council member who ran on a platform of encouraging development, said he thought his city should use its size and relatively simple process strategically.

“If we have that advantage, we should certainly be using it,” Ellett said.

A chief reason many business owners need a hand in deciphering the process, according to Stinson and others, is the city’s complicated land-development code. The code is slated for a rewrite this year after the initial CodeNEXT land code revision process ended last year with City Council requesting more change. The rewrite is now led by City Manager Spencer Cronk, with City Council tentatively scheduled to review an initial draft of a new code rewrite proposal this fall.

According to Cronk, the rewrite effort will focus on addressing a few key points: scope of revisions, density and housing, compatibility standards and parking.

Public opinion on the potential impact for the rewrite has been mixed. Stinson said he was unsure of the rewrite’s implications for small-business owners.

“I think the land-development rewrite will have minimal effect. I really do,” Stinson said. “I don’t see a new land code making it a whole lot easier for people who aren’t knowledgeable about this to finish their projects.”

Tahuahua, however, said the rewrite is a move in the right direction.

“The way we’re gonna make a difference is by getting the land-development code right so we have more efficiency,” he said.