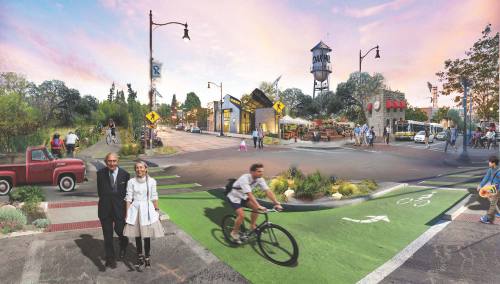 A group called Save Oak Hill is pitching a new concept for Oak Hill Parkway that would have an Old Town Oak Hill and local access road.

The proposed 12-lane project on Hwys. 290 and 71 near the Y at Oak Hill has raised environmental concerns from residents, who are also concerned about the scale of the project.

“I’ve personally witnessed the changes in traffic in this area, and it’s gotten a lot worse,” said Kent Browning, an Oak Hill resident who is also an engineer and a member of the Fix290 Coalition. “… The current [Texas Department of Transportation] design for Oak Hill is a Cadillac design for a Volkswagen solution.”

TxDOT originally proposed a 12-lane highway with six tolled lanes, but in late 2017 Gov. Greg Abbott informed TxDOT officials that state funding should not be used on projects with tolled elements.

The state agency unveiled in May a new proposal for a nontolled project that showed six main lanes of traffic with two to three frontage road lanes in each direction. Elevated lanes will start at William Cannon Drive to take traffic over Hwy. 290 while frontage roads will run alongside and underneath the highway.

“Now that toll roads are not allowed, the design is far more than is required,” Browning said. “A quick analysis shows more lanes would not mean more traffic through-put.”

The changes to the project have required an update to the Capital Area Metropolitan Planning Organization's 2019-22 Transportation Improvement Program to add the Hwy. 290 and Hwy. 71 project to the plan because construction is anticipated to begin in 2020. CAMPO documents state the total cost is estimated about $545 million.

The CAMPO board, which comprises local elected officials, is scheduled to approve amendments to the plan in January.

However, residents in the Oak Hill area, including Browning, told officials at a Dec. 10 CAMPO board meeting that they think the project is too costly and would take up too big of a footprint without the tolled element.

“At a time when transportation dollars are becoming more scarce than ever, we really need to consider right-sizing our projects so that we don’t blow our budget,” said Kelly Davis, who represents environmental group Save Our Springs Alliance.

“That means that a massive spill from a semi truck could make it there in one day, possibly decimating engendered species,” she said. “We don’t feel the draft [environmental impact statement] adequately found that there would be no impact to those species.”

A group called Save Oak Hill has instead pitched its own proposal for Oak Hill Parkway that would have a smaller footprint, present fewer environmental issues and save more than 280 protected, heritage and legacy trees, including about 50 trees in an area known as Hampton Grove.

“By creating a local grid network, it would create opportunities for more thoughtful development such as Old Town Oak Hill,” said Daniel Alvarado, an urban planner hired to consult with Save Oak Hill.

The proposal shows a local access road on the northern side near Williamson Creek with a highway divided by a greenbelt trail.

“We think this is the sweet spot,” Oak Hill resident Steve Beers said.

Richter said various neighborhood groups have met with TxDOT officials to discuss the plan but that officials plan to proceed with the agency’s plan.