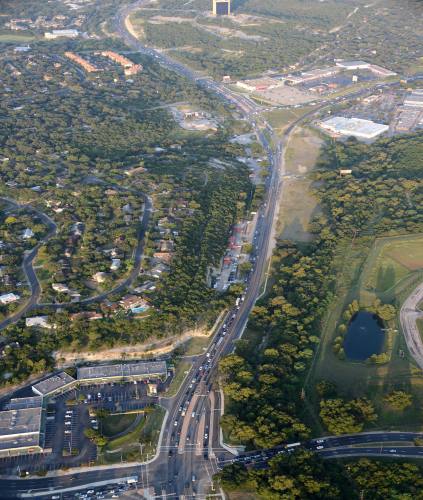 A flyover image shows the Y at Oak Hill, one of the most congested roadways in Central Texas, according to the area mobility authority.

As one of the most congested roadways in the state of Texas according to the Central Texas Regional Mobility Authority, agency officials hope an updated highway system through the Y at Oak Hill—the intersection of Hwy. 290 and Hwy. 70 in Southwest Austin—will help address congestion in the area.

Launched in 2012, the Oak Hill Parkway project aims to improve mobility in the corridor with a high-speed  highway that stretches across 12 lanes. The design will span 1 mile on Hwy. 71 and 4 miles along Hwy. 290.

“CTRMA is trying to create a system centered around maintaining and improving quality of life for Central Texans,” Heath said. “We know people are moving out and affordability is impacting where people can live, yet they’re commuting back into the city so we know there is an extensive need down there. So, what we’re trying to do is create a system that can get people in and out of the city to get to work and other social gatherings.”

Following the completion of a five-year study, the mobility authority will decide whether it will build the 12-lane highway system. It expects to begin construction as early as 2020.

Two proposed designs were presented to residents in 2015, as well as a no-build option.

Over a three-year period, the mobility authority held a series of open houses to gather input on what the community wanted to see with this project. Through that process, two designs were proposed featuring similar plans that differ in terms of elevation and access.

Similarities between the two designs include:

Heath said while the designs are similar, there are some minor differences:

The project also includes a few downsides that would require the removal of tree vegetation, a few commercial sites and one home. A few sound walls are also proposed for some areas.

Most residents living in the Oak Hill area have lived there for years, the mobility authority said. Congestion at the Y is a common frustration for most and anything that can be done to improve flow of traffic is welcomed, said resident Robert Tobiansky, secretary for the Oak Hill Association of Neighborhoods, or OHAN.

“Most people through the years have said, ‘Just build it already,’” Tobiansky said. “The downside of not building is kicking the can down the road because you’re going to have to build it anyway, but it will be much more expensive.”

In January 2015, OHAN, a group composed of neighborhoods in Oak Hill, passed a resolution in anticipation of the Oak Hill Parkway project.

The resolution was influenced by resident input and covered 10 key goals, including environmental integrity, connectivity, access and elevation.

Tobiansky, who lives in the Aviara neighborhood along Old Bee Cave Road, said some residents in his neighborhood feel the road will positively affect traffic. However, he said some are also concerned with access.

Business owners in the area share a similar desire for better traffic flow through the Y, commenting on the need for improved mobility not just for their clients but for themselves and their employees as they make their daily commutes.

Beth Cesari, owner of the Bronzed Bunny spa located in Oak Hill Plaza, said the congestion at the Y affects her business and clients. Cesari said she chose to open her business in the development because it is a pivotal spot for growth.

“Because of all the traffic, a lot of times people show up late for their appointments,” Cesari said. “The good news is a lot of people do come here so that is great for business, but if our clients show up late to their appointment, we are scrambling to accommodate them. I welcome an efficiency gain there.”

While most seemed to agree that improving mobility at the Y is needed, some community members expressed concern with the loss of the Heritage Oak trees and the way the parkway could isolate certain residents.

Cynthia Wilcox, a Travis Country neighborhood resident and OHAN board member, said the highway was pointless and devastating to the community.

“It’s going to divide our community just like I-35 divides east Austin from the rest of the city,” Wilcox said. “That’s going to be damaging to the social aspect of residents and the business community on either side of the highway.”

For better or for worse?

Although smoother traffic flow is a need expressed by the community, some stakeholders question whether the project is going to improve traffic and if the highway will have the capacity to withstand the area’s projected growth.

David Richardson, a resident in the Granada Hill & Estates neighborhood and OHAN board member, said there is a need for more capacity but added the proposed highway project is not sufficient to handle the increase of residents who will likely move into and travel through the area.

“[Growth in the area]—as it is now configured—is moving toward Nutty Brown Road, and to force the entirety of the traffic through Oak Hill, I think is misguided,” Richardson said. “I think there are other opportunities near the Hays County and Travis County lines to connect Hwy. 290 to Loop 1 [MoPac].”

He projects that when the proposed parkway becomes congested several years after it is built, residents are going to avoid traffic at the Y and will be forced onto feeder roads, such as Nutty Brown Road and FM 1826, to reach MoPac.

“In the overall scheme of things, my sense is that [the transportation agencies] failed to look at greater opportunities to create a network of roads as opposed to one road that goes only through Oak Hill which is a geographically constrained area,” Richardson said.

Wilcox shared the same concern and suggested the agencies find a way to direct traffic into Austin through areas other than Oak Hill and also make the the Oak Hill area more flexible for other transportation and ride-sharing opportunities, such as Chariot, a San Francisco-based ride sharing and commuting service, and Uber.

Some residents also voiced concerns with flooding due to the parkway’s projected amount of impervious cover, or surfaces like pavement that do not absorb rainfall.

Heath said the project does call for upstream water detention ponds that will act as drainage and flood mitigation. She added the parkway does have the ability to handle the growth of the city.

“The design does have the capacity to add an additional lane in each direction that can be used as a transit-only lane or a lane for cars,” Heath said. “It could not, however, become a rail line.”

Following the completion of the environmental study in 2018, the mobility authority will select a build alternative based on set evaluation criteria, which includes safety, noise and purpose. The community will have an opportunity to comment on the selected design in a public forum as well as online and in various pop-in meetings.

As of press time, Heath said the decision to select a build alternative in December 2017 was postponed due to the need for more discussion over funding by the lead agencies.