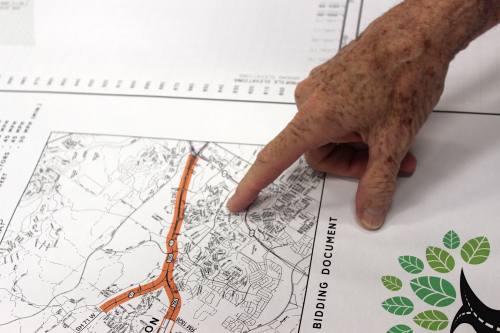 Kennedy points to key areas of congestion as he reviews TxDOT's proposed solutions.

South Austin residents learned about the proposed build for the Oak Hill Parkway project at a public hearing May 24 hosted by the Texas Department of Transportation and the Central Texas Regional Mobility Authority.

The Oak Hill Parkway project aims to improve mobility near the Y at Oak Hill—the intersection of Hwy. 290 and Hwy. 71. After numerous build options were considered, TxDOT selected Alternative A for the project.

“We’ve had a lot of public input,” TxDOT spokesperson Diann Hodges said. “Alternative A was the one the community wanted, and it’s the one we selected.”

Drivers waste more than 454,000 hours a year in traffic near the Y, according to a 2015 study by the Texas A&M Transportation Institute. The Capital Area Metropolitan Planning Organization projects that traffic at the intersection will more than double by the year 2040.

Kennedy said he attended the hearing to learn more about the proposed plan. He said the community has been fighting for change for years.

Alternative A, as presented on May 24, is a non-tolled project with six new mainlines for through traffic on Hwy. 290. Proposed improvements include an additional two to three frontage lanes in each direction. An overpass for Hwy. 290 at William Cannon Drive, along with flyovers between Hwy. 290 and Hwy. 71 would also be constructed, according to the presentation.

“It’s a monster,” South Austin resident Linda McWhorter said. “But by the time they get it built, it still won’t be enough.”

McWhorter said she wanted to review the 369-page Draft Environmental Impact Statement and to voice her views on the controversial project. Concerns raised by her fellow residents included threats to commercial access, a loss of residential property values, increased noise, harm to historic trees – the namesake of the Oak Hill community – and jeopardizing aquifer recharge features.

“My honest thought is that something is needed,” McWhorter said. “It’s getting worse and worse. But this [project] is very short sighted.”

Hwy. 290 in Oak Hill is the 64th most congested roadway in the state of Texas, according to the Texas A&M Transportation Institute. It serves as a key corridor between Austin and fast-growing communities south and west of the city, including Lakeway, Bee Cave and Dripping Springs.

According to TxDOT, public comments shared at the May 24 hearing and received through the online virtual hearing, May 4 through June 18, will be considered as they prepare their Final Environmental Impact Statement. The statement is anticipated to be released in the fall of 2018.

The proposed build is projected to cost $398.6 million, Hodges said. TxDOT has identified about half of the funds to date and hopes to secure the remainder from state and federal funds, she said. The earliest construction would begin  is 2020.

“The community is ready to move forward,” Hodges said. “They want us to do something, and we’re ready to act.”

The public is invited to participate in the funding conversation at an upcoming meeting for the 2019 Unified Transportation Program, TxDOT’s 10-year plan for transportation project development. The next meeting is July 12 at 4 p.m. Those interested can attend in-person at the Austin District Headquarters, 7901 N. I-35, Austin; submit a comment online; print and mail a comment; or attend via web conference.

Visit www.oakhillparkway.com for more information on the project.