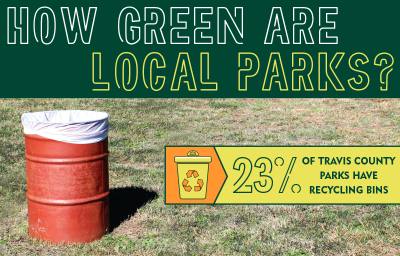 Only six of 26 parks managed by Travis County have recycling receptacles, and many of those bins are dated and in need of replacement, said Shaun Auckland, conservation coordinator for the county.

“Implementing a robust recycling program and educating the public on what can and can’t be recycled is substantial for us to be able to reach  our 90 percent zero-waste goal,” Auckland said.

The county joined the city of Austin in 2014 with the goal of diverting at least 90 percent of discarded materials from landfills by 2040. To reach this goal Travis County created a Green Team that has helped increase the diversion rate of the waste produced by the county from 5 percent to 34 percent, Auckland said. The county also purchased recycling and trash containers for public spaces at county facilities in 2016.

However, nearly 3 out of every 4 county-maintained parks do not provide recycling options. With 500,000 annual visitors to parks in the western part of the county alone, few options exist to recycle materials at the parks, said Timothy Speyrer, Travis County Parks district manager.

Resident Joan Quenan said it is difficult to recycle in many county parks.

“I usually have to take my stuff home to recycle it, which most people won’t bother doing,” said Quenan, who often utilizes hiking trails at several county parks. “We should be teaching people how to recycle by having it readily available in the parks.”

Public access to recycling services sends the message that recycling is something one should always do, said Andrew Dobbs, Texas Campaign for the Environment Central Texas program director and legislative director.

“It takes [recycling] from this luxury process or something that’s a nice thing to do to a basic service done because it’s the responsible thing to do,” Dobbs said. “It shouldn’t be a moral behavior or cultural touchstone. Recycling is the basic way of handling materials that still have valuable life left in them.”

Recycling can also have a positive impact on the economy, according to a 2015 study done by the Texas Commission on Environmental Quality.

During each stage of the process, from collection to manufacturing, economic activity is generated in the form of employment and workers’ wages, the report states.

However, when a person goes to a government facility—whether a park, office building or other center for services—and recycling receptacles are not available, this reinforces the idea that throwing materials into a landfill is an appropriate step to take, when in actuality it is a waste of energy and resources, Dobbs said.

As someone who works with government entities on environmental issues, Dobbs said it did not surprise him that  only 23 percent of the county’s parks have recycling.

An unfortunate reality in Texas is that landfill disposal of waste is cheaper and easier than recycling, which has not been a priority for waste management, Dobbs said.

“It’s a long-term struggle,” he said. “But the county is looking to change and clearly asking the right questions.”

As a first step in providing more recycling options, the county is collecting data using a geographic information system, or GIS, application. The “Collector” app keeps track of containers and production of waste at parks. To date 13 county parks are mapped, Speyrer said.

“We are using the GIS information to look at how many trash cans and recycling receptacles are in the park, if we’re missing certain areas and if we have enough receptacles,” Speyrer said. “From that data, we will develop a waste management plan to address this moving forward.”

Improving recycling services and waste management across all the county-maintained parks will likely happen in phases, she said.

Taking inventory is just one element of the conversation. The county is also exploring different types of containers for proper disposal of both trash and recyclables.

“It’s not just a matter of going out and buying a Rubbermaid trash can,” Speyrer said. “These durable, weather-resistant containers are not cheap. We are piloting a few different types to determine what is the most durable and works the best.”

In flood-prone locations concrete containers are less likely to be whisked away in floodwaters, Auckland said. For sports complexes and other parks with flat, open fields, the county is researching sturdy but easily-relocated bins. Wooded parks need containers that can prevent animals from getting inside the bins, she said.

The county has ordered several new models of “twin bin” containers that pair recycling on one side and trash on the other. This side-by-side pairing promotes proper placement of both waste and recyclables and reduces potential misplacement of the different materials, Speyrer said.

“We are aware of human nature,” he said. “It has to be easy to recycle, or people won’t do it.”

Consistent, uniform signage in English and Spanish that includes clear illustrations is another aim of the county’s  recycling effort. Without clearly depicting which materials can and cannot be diverted from the landfill, recycling efforts could still fall short, Auckland said.

“There has to be a substantial amount of education for the public and [parks]staff in order to have successful buy-in,” she said.

One park alone can have 100 or more units, Speyrer said. Twin bins can range from $642 to upwards of $1,000 each. This adds up quickly when implementing a new program in 26 public parks.

Resident David Mack Endres said it would be great for the county to provide more recycling containers in the parks, but he doubted the recycle stream would be very clean.

“Many people disregard the need to segregate [recyclables],” he said. “If [the county] could provide true single-stream recycling for everything but organic waste, it might be useful.”

Harry Cleaver, an associate professor of economics at The University of Texas at Austin, said he wondered why so few parks offered recycling bins.

“If containers can be made available to every resident, why not to the parks?” Cleaver said.

Determining how to prioritize recycling in county parks depends on where funds would come from, he said, adding he wondered if new taxes would be levied to fund recycling efforts.

Dobbs said it is important to remember when throwing trash away, there is actually no such place as away.

“When trash is thrown away, it is actually being sent to someone’s neighborhood,” Dobbs said. “A lot of our landfill stuff goes to low-income communities— places where people are vulnerable to the harmful impacts of waste.”

“It’s important we minimize what we discard,” he said. “If we recycled everything, we wouldn’t need the landfills.”