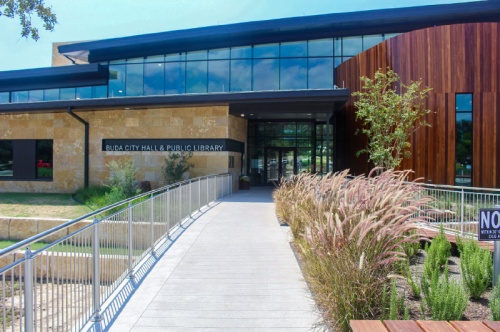 Buda residents are now able to access their city officials, their city services and a vastly expanded public library all in one place.

That place is the new Buda municipal complex, a 55,000-square-foot building just off Main Street that was designed with the idea of bringing everyone—citizens included—under one roof.

“Our goal,” former Mayor Pro-Tem Bobby Lane said, “was to blend that building in with the existing scenery and make it a centerpiece of Buda.”

In addition to the library, the building houses the City Council chambers, city administrative offices, community multipurpose space, an emergency preparedness control room and offices for the Buda Economic Development Corp. On the same site is the new public safety building, a separate 14,420-square-foot structure that houses the police department.

The complex was designed by the Austin-based firm Page; the plan called for wood, Texas limestone, and plenty of skylights.

“The design speaks to the nature of the community of Buda and the city management’s desire to have an open and transparent local government,” said Ginny Chilton, the project manager for Page.

Lane, who served on the City Council for 17 years, said: “We tried to design an open, fresh, naturally lit area. We wanted to show that we were focused on customer service.”

One of highlights of the project, City Council Member Evan Ture said, is the amount of public meeting space it offers. It will “establish Buda as a community,” Ture said, and “give a sense of how vibrant that community is.”

The city began to think seriously about a new City Hall around 2013, Lane said, by which time the old one had already been remodeled several times to accommodate more staff to serve the city’s rapidly growing population.

In early 2014, Buda officials the began to put together a facilities master plan. They also conducted a community survey and convened meetings of the Library Facility Steering Committee and the Buda Bond Advisory Committee.

The result of those efforts was a bond that went on the ballot in November 2014. Voters approved the $55 million bond; $21 million of it was set aside for the new municipal complex, and $6.75 million was set aside for the public safety building. The rest went toward infrastructure improvements such as parks, roads and drainage. The BEDC was not part of the original bond, so it is leasing its space, which has its own entrance.

BEDC CEO Ann Miller said the complex is a “big credit to the citizens” who approved the bond and trusted the city to manage the funds.

The Buda City Council acted quickly after the bond was approved, voting in early 2015 to spend $1.7 million to buy 8.6 acres from Jardine Foods, which is still headquartered on the adjacent property.


Bumps in the road

The city encountered two significant obstacles on the way to completing the new complex.

First, the original plans for the building included a drainage system designed to withstand a 100-year-flood event without damage. But historic rains in October 2015 demonstrated that the site—which was previously undeveloped and empty, except for a few grazing longhorns—was more vulnerable to flooding than originally thought.

In early 2016, the City Council met to vote on whether or not to find a different place to build. A majority of the council was in favor of staying with the Main Street property, but the vote was close, with three members opposed.

Instead of changing the site, the council authorized an additional
$4 million to upgrade the drainage system to withstand a 500-year-flood.

“Basically we engineered ourselves out of that problem,” Lane said, and Buda Public Information Officer David Marino said that the significant rains accompanying Hurricane Harvey did not affect the new building.

The second challenge was a live oak tree growing in the middle of the footprint of the public safety building. The tree measured 53 inches in diameter and was estimated to be around 260 years old. Under city code, trees with a diameter of more than 20 inches are classified as heritage trees, which meant cutting the tree down would mean not only losing the tree, but likely planting more trees elsewhere.

After some discussion the council decided to move the tree. Initial cost estimates were more than $300,000, but after negotiations, $232,167 was enough to hire a company to move the oak from the site of the public safety building to the southeast corner of the property. It was closely monitored in the following months but so far has survived and is doing well.


The future of Buda

Marino said the city is “being proactive in addressing Buda’s growth,” and that the new building will be able to accommodate more staff as the city continues to grow.

The initial goals of the municipal complex, Lane said, were “customer service and consolidation of functions, and then get the library a larger space and the police their own building.”

But the complex also represents some of the changes that Buda has gone through.

“It says we’re no longer a small rural town,” Miller said. “It makes a statement.”

The municipal complex replaces three city-owned buildings: the old City Hall, the old library, and the annex, which is located at 100 Houston St. and formerly housed some city staff and the police department. The BEDC was leasing a separate space.

The future use of the City Hall and the annex have not been decided, but at a meeting on Aug. 7, several council members said that the city should retain ownership of the buildings. The Tourism Department and the Main Street Advisory Board are expected to move into the old library.

“I think what it’s done is put us in a very professional position that will last for at least 15-20 years,” Lane said. “It’s a good way to welcome people to town.”
SHARE THIS STORY