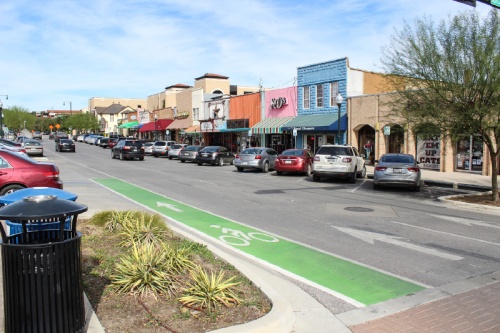 According to city officials, the plan was created with socioeconomic data from the City of San Marcos 2013 Comprehensive Plan “Vision San Marcos: A River Runs Through Us” in mind. This is the first time the transportation master plan has been updated since 2004.

“We reviewed that plan, and really it was trying to get them from one place to another quickly, but now it has really changed,” Hughson said. “The whole mood has changed—we’ve got more people on bikes, and we’ve got more people who are walking. So, there’s an extra concern about safety in this plan.”

One of the plan’s guiding objectives is to create a transportation network that improves accessibility and mobility while minimizing congestion and pollution. Additionally, the plan focuses on increasing bicycle usage by expanding safe and convenient bicycle lanes and trails in addition to a well-connected pedestrian network with an emphasis on safety and accessibility.

Under the new transportation master plan the city will work toward creating a transit network to serve downtown and other key intensity zones by 2035. This highlights an overarching goal built into the plan, which is to encourage a shift in mode from automobiles to active transportation such as walking and cycling.

Designed with a “complete street” approach, the new transportation master plan focuses on developing streets in a way that maximizes benefits not only for drivers but also for cyclists, pedestrians and the environment.

As for environmental considerations the plan encourages the use of rain gardens, biofiltration swales and other low-impact drainage facilities within medians and landscaped areas to intercept and naturally treat urban runoff, according to the document.

“I mean, we live here because it’s beautiful,” Hughson said. “And one of the things that make [San Marcos] beautiful is also what makes it environmentally sensitive. We’ve got to make sure that we don’t cause issues, and we certainly don’t want to destroy any of the beauty of San Marcos.”

In order to achieve that goal the plan states the city should design streets to enhance the safety of all modes within the transportation network and conduct surveys to monitor the different mode choices made by residents in different parts of the city every five years and note the progress toward reaching modal shift goals over time.

To reduce urban runoff from roads and parking lots, the plan recommends the city invest in green infrastructure by reducing roadway widths where possible and opting for pervious asphalt, concrete and other pavers rather than impermeable concrete, which prevents water from soaking back into the ground.

The thoroughfare plan, which is included within the transportation master plan, recommends the city implement narrower streets to promote slower driving speeds and increase pedestrian safety.

Place 3 City Council Member Ed Mihalkanin said he believes the plan is vital because it will guide future transportation infrastructure and policy with safety as the top priority.

Sidewalks should be provided along both sides of all thoroughfare types, and medians should be implemented where pedestrian crossing distances exceed 40 feet to act as a pedestrian refuge in the center of roadways, according to the plan’s recommendations.

With the aim of increasing and improving transit systems, the plan recommends the city plan a summit for transportation leaders to discuss the connectivity between existing mass-transit systems, such as the Texas State Shuttle and the Capital Area Rural Transportation System. Hughson said City Council has begun a dialogue with Texas State and CARTS.

“And we are looking to see if there’s any way of merging the two bus systems, which would help in a number of ways,” Hughson said. “It would provide the wider shift so that we could run them out more often, but it would also give students the opportunity to get to places of employment.”

Additionally, Hughson said, combining the bus systems would effectively extend the hours of operation and scope of service of the city’s mass transit. Texas State Shuttles primarily go from the university to student apartments whereas CARTS services a wider area of the city.

Ride-sharing services should be encouraged within the city to eliminate congestion on roadways, according to the plan. It also stipulates that the city should regulate the use of autonomous vehicles to prioritize safety and create dedicated holding lots near the city’s intensity zones. Additionally, the plan states city leaders should develop a detailed autonomous mobility plan to establish policies regarding the integration of autonomous vehicles.

“There’s been a lot of good work put into the plan, and we appreciate all of the input from our citizens,” Hughson said. “We’ve added a number of things to the plan due to their input that have improved the plan.”
SHARE THIS STORY