Voter turnout a focus in next Hays County primaries 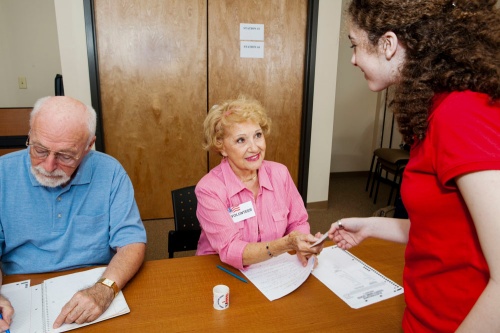 Voter turnout during primaries in Hays County is notoriously low.

All eyes will be on Texas two weeks from now, when the state holds the country’s first midterm primaries of 2018.

The March 6 primaries are the first in a slew of elections Hays County will see throughout 2018 as county commissioner, school board trustee and city council member terms expire.

Texans running for office will find themselves in an election year with notoriously low voter turnout, according to Beth Stevens, voting rights director for the Texas Civil Rights Project, a nonpartisan legal advocacy group.

“People don’t tie March to voting unless it’s a presidential primary,” she said. “[Elections in March are] just less on people’s minds.”


Small crowd at the polls

In 2014—the last time the country had a non-presidential primary and general election—about 37 percent of Americans voted in the general midterm elections, according to a report published every two years by Nonprofit Vote.

Narrowing in on Texas and Hays County, that number equals 33.7 percent and 38.15 percent, respectively, in the general election, according to the Secretary of State’s office and the Hays County Elections Office.

“There’s just less interest [in voting] than there is during presidential elections,” said Joshua Blank, manager of polling and research for the Texas Politics Project at the University of Texas.

“[Presidential elections are] something that everyone—even those people who are uninterested in politics—still pay attention to, at least a little bit. Because of the widespread attention, people are more likely to engage in what they perceive as their civic duty.”

This was especially true in the 2016 presidential election, when 59.39 percent of Texans, or about 9 million of the 15 million registered voters, turned out to vote. Still, the 9 million voter number was eclipsed by the 19.31 million Texans who were at least 18 years old and eligible to vote at the time of the election.

Blank said there are several factors in play that could indicate higher voter turnout in the 2018 primaries.

Blank said Texas is also “ground zero” for several issues at play during the 2018 election, including immigration; border control; and DACA, the contended Deferred Action for Childhood Arrivals program that allowed individuals who entered the U.S. illegally as children the right to stay and work.

“Any discussion on immigration and border security is very likely to pique the interest of Republican primary voters, but to some extent Democratic primary voters as well,” he said.

In Hays County, three of the four commissioners and the county judge are up for re-election in November. Eighteen Republicans and four Democrats are competing for the U.S. House District 21 seat as Rep. Lamar Smith, who currently holds the seat, retires.

One of the GOP contenders for that race is State Rep. Jason Isaac, R-Dripping Springs, whose seat in the Texas House  of Representatives representing District 45 is being sought by five Republicans and three Democrats.

State Sen. Donna Campbell, R-New Braunfels, is also up for re-election and faces one Republican challenger and two Democratic challengers in the Senate District 25 race.

Citizens can find candidate listings for the contested March primaries in the election guide on Page 25 and a list of all candidates running at
communityimpact.com/vote.

Open filing has also begun for the May 5 general elections in which two San Marcos CISD at-large board of trustee seats, one Hays CISD at-large seat and the HCISD District 3 seat are up for election.

HCISD incumbents Bert Bronaugh and Will McManus have filed for re-election. Michelle Cohen, a systems analyst, filed to run against McManus last week. Holly Raymond, who currently holds the seat, will not run for re-election.

SMCISD incumbents Anne Halsey and John McLothlin have filed, along with newcomers James McCutcheon and Harvey Jenkins. The last day to register to vote for the May elections is April 5.

The last day to file for candidacy in the May elections was Feb. 16.

Voters will also choose who will fill several San Marcos, Kyle and Buda city council positions during the general election in November. Candidates can begin filing for election July 21.

Hays County Elections Administrator Jennifer Anderson said her team is prepared for the amount of work necessary in facilitating these elections.

“We’ve been forward-thinking for several months now, and we’ve been pretty prepared for just about everything,” she said.

She said she agrees national politics influence voter turnout and encouraged residents to go the polls.

“If you want to know where your biggest tax dollars are spent, they are spent locally,” she said. “To me [local elections] impact the citizens of Hays County more in those areas because these are the people that are making decisions on your services; these are the people that are collecting your tax dollars right here and using them more directly on you. They affect me more on a daily basis than the federal government does.”