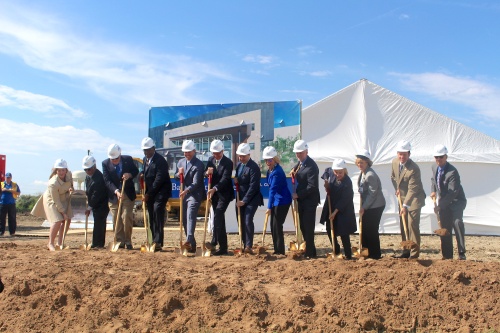 In an effort to expand Buda's economy and job market, Buda's Economic Development Corp. has been targeting the healthcare industry to bring sustainable growth to the city.

Across the street at 5225 Overpass Road, Buda, Ascension officials turned the soil for its new Seton Health Center.

Later that afternoon, St. David’s HealthCare announced it would bring an 24/7 emergency center to 15610 I-35, Buda.

David Huffstutler, president and chief executive officer at St. David's HealthCare, said with rapid growth occurring in Hays County, Buda met a lot of factors the hospital looks for when searching for a new location.

“St. David’s determines the location for healthcare services based on a variety of factors, including the availability of healthcare services in the community, the core population of the surrounding area, community demographics, projected growth, residential concentration, destination retail development and traffic patterns, etc,” he said. “The Buda location represents a convenient location to deliver needed healthcare services for the growing community.”

Baylor Scott & White and Ascension officials agreed and said Buda—a growing city along the I-35 corridor—was an ideal location to bring more healthcare services so people could get can get care closer to home rather than having to travel to Austin.

Buda City Manager Kenneth Williams said Buda has laid down the appropriate infrastructure in anticipation of companies such as Baylor Scott & White, St. David’s and Ascension, and city staff will continue to look for ways to further develop Buda.

“We were working with [Capital Metro] to see whether they will bring a bus service to Buda in the Southpark Meadows area,” he said, referring to the shopping center  located off I-35 in South Austin. “There was a delay to some of the federal funding, but we anticipate those discussions coming back this year and hopefully we will get something done soon.”

Williams added projects like these medical developments coming to the area will make city officials look at the housing situation and the type of housing available in Buda more closely.

“We’ll be looking at typical housing that [hospital support staff] can afford and also high-end executive housing because with these type of projects that bring in doctors and professional people into the community, they will all need somewhere to stay," he said.

“There are already some projects in the works because of this rumor that has been swirling for over a year about [Baylor Scott & White] coming here,” Miller said. “Another thing that is going to happen is Buda doesn’t have a daytime population, so it is hard for restaurants to make it work here because they only have the dinner crowd. [These medical centers] are going to help with that. We should see a lot of their employees live here, so there should be a lot of disposable income flowing through the community.”

According to Ascension Texas Chief Strategy Officer Ray Anderson, the $14.5 million outpatient center located across the street from Baylor Scott & White's anticipated hospital will be an approximately 20,000 square-foot facility that will include primary care, urgent care, women’s care and specialty care with a focus in dermatology, pediatrics, physical medicine and rehabilitation, and gastric and digestive illness care. The center will also have on-site lab testing, walk-in services, extended hours and telehealth in dermatology, psychiatry and neurology.

Construction on all three medical centers will begin mid-April and open in early spring 2019.

Ruth Welborn, dean of the College of Health Professions at Texas State University, said the added healthcare services will not only be a benefit to the residents of Buda but also to the more-than-2700 Texas State students studying in one of the college's eight healthcare programs.

Baylor Scott & White will bring 150 new jobs to the area in its initial year and the average wage for all the jobs created will be no less than $30 per an hour. Ascension, which operates Seton Healthcare Family, estimates that in the initial stage of the new facility, 50 new jobs will be created; and St. David's will add approximately 25 jobs to Buda’s market.

Welborn said as part of their degree, students must do clinical rotations at a medical facility, and the addition of St. David's ER, Baylor Scott & White's hospital and Ascension's new medical center will provide students with more options for where to perform the rotations.

She said the new facilities in Buda could also provide more research opportunities for professors.

Recek agreed that new facilities also means more options for clinical rotations and a better chance for students to establish a relationship with future employers in a medical setting.

“When [students graduate], they have been exposed [to the clinical experience] and they are in an excellent position to be very good entry-level practitioners," Recek said.

The majority of ACC's health sciences programs are offered at the Eastview campus in East Austin and the Round Rock campus.

"I know the college is always trying to look toward the future and very strategically determine where additional programs are going to be," she said. "I think certainly [ACC recognizes] that the growth in the southern part of our service area has really been quick."

ACC has a Hays campus in Kyle that primarily offers general education courses. In the fall, it will open a First Responder Training Center that will include an emergency vehicles operations track, a 50-yard tactical indoor firing range and a simulation training space for police SWAT-type exercises.

The community college system also hopes to offer a bachelor's degree in nursing starting this fall and is waiting on approvals by various accredited college boards before beginning to advertise the program.

For Texas State, in its 2017-2027 master plan, the university said it plans to move more healthcare programs to its Round Rock campus, where its nursing program is currently offered. This year, the departments of communication disorders, respiratory care and physical therapy will move to the Round Rock campus.
SHARE THIS STORY