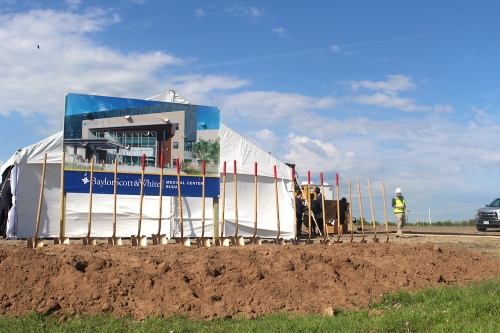 Baylor Scott & White Health intends to make at least a $35 million investment in land, building equipment and inventory, and according to the economic development agreement withe the city of Buda, the average wage for all the jobs created will be no less than $30 per an hour.

After nearly two years of negotiations with the city of Buda, Baylor Scott & White Health broke ground on its full-service hospital Wednesday morning.

The 77,525 square-foot complex at at 5330 White Wing Trail, Buda, will be the first Baylor Scott & White hospital in Hays County. This follows the opening of the medical center’s first clinic in Kyle last October.

Jay Fox, Baylor Scott & White president for the Austin/Round Rock region, said the company is looking forward to working with the city of Buda to create the new medical facility.

“We’re enthusiastic about our mission to create a healthier Texas and look forward to offering residents a unique and integrated healthcare model,” he said.

"Buda is experiencing tremendous growth, and in this community it is an unmet need. You all need a hospital. A hospital is part of the services we provide," Watson said. "It is crucial to have that sort of central campus where you can [have the care you need], but we also plan to expand [in the future] to have a broader network. Most of the care patients get is in an outpatient setting, and we want to be able to do that [in Buda] too."

According to the agreement, the Buda Economic Development Corp. will provide Baylor Scott & White $375,000 to be used to reimburse the company for the development of infrastructure, such as a turn lane, driveway access and water and wastewater connections. In addition, the hospital will bring 150 new jobs to the area in its initial year and the average wage for all the jobs created will be no less tan $30 per an hour.

“I have been saying to my board that with this project, I feel that Buda will soon be the health capital of Hays County, so I would expect a lot development to occur not only with Baylor Scott & White but also [with] their competitors in Buda because of this project.”

Buda City Manager Kenneth Williams said Buda has been preparing for this growth for years and has plans in place to accommodate the growth coming to the area.

He also said there is potential for a public transportation service in Buda in the next 1-2 years as city staff continues to work with the Capital Area Metropolitan Planning Organization and the Capital Area Council of Governments, and the city continuously brainstorming ways to bring in a diversity of housing to meet the needs of the community.

“Buda does not have daytime population, so it is hard for restaurants to work here because they do not have people eating lunch here. They only have the dinner crowd. This [new hospital] is going to help with that,” she said. “We should see a lot of their employees live here, and they’re high-wage jobs, so there will be a lot of disposable income going through the community.”