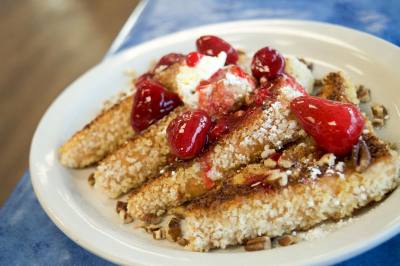 Solisu2019 favorite breakfast item on his menu is the restaurantu2019s French toast, a crunchy alternative to the breakfast classic.

Now, more than three decades later, Solis owns several restaurants across Texas. His most recent restaurant, Hutto’s Hit the Spot Cafe, is beginning to carve out a niche in the town as a go-to breakfast, brunch and lunch spot —especially on Saturday and Sunday, according to Solis.

Hutto’s Hit the Spot Cafe opened the last week of May and is the second Hit the Spot Cafe in the area—Solis opened the first location in Garfield in 2010. Solis brought his restaurant concept—handmade, home-cooked meals—to Hutto after Beau’s Specialty Meats and Deli closed. A customer familiar with the two restaurants got the owners talking to each other, and Solis was invited to come open in Beau’s former building.

Solis had never visited Hutto before he came to scout the location, but Solis said he realized the potential of the location right away.

The restaurateur said his new restaurant was not expecting the high volume of customers when it opened, and the restaurant hit some stumbling blocks as a result. But Solis said the kitchen and waitstaff is constantly training while Solis himself works on refining the Hit the Spot menu, even hinting at new dinner options on the horizon.

Currently Hit the Spot Cafe has a diverse menu that ranges from pancakes to enchiladas, steaks, burgers and more. The cafe serves breakfast all day, every day with subtle twists to diner classics, such as a nutty, crunchy French toast or strawberry and almond-topped crepes filled with sweet cream cheese.

“The filling tastes like a New York-style cheesecake,” Solis said.

Hit the Spot Cafe features Southern comfort food staples, such as liver and onions and fried chicken. Solis’ menu also includes Tex-Mex meals such as carne guisada and more with tortillas that are all made in-house by hand.

“I wanted to cater to everyone at the table,” Solis said.