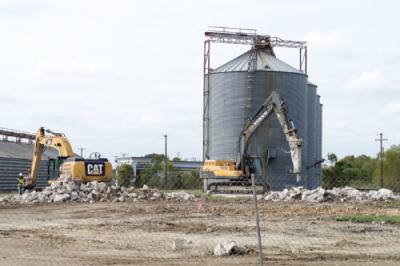 The city of Hutto has approved a TIRZ for necessary infrastructure improvements on the Co-Op District, including public parking and wastewater systems.

An aspect of funding for the Co-Op District in Hutto became a little more clear Thursday night after Hutto City Council voted to approve the creation of a public funding district.

The funding proposal now goes back to the Williamson County Commissioners Court, which delayed a vote on the public investment district Tuesday. Commissioner Larry Madsen, who represents the area surrounding the Co-Op District, said at that time the county and Hutto attorneys would have to iron out details before proceeding with the vote.

Hutto city officials voted unanimously to create Reinvestment Zone No. 1 with the purpose of paying for wastewater and sewage infrastructure, improvements to Hwy. 79 and necessary utility work.

A tax reinvestment zone, or TIRZ, is a development tool for public or private parties to invest in necessary infrastructure for a designated area. Future tenants within the designated investment zone pay portions of the outlined collected property tax revenues in order to pay back the debt.

The 25-acre Co-Op District would be outlined as the TIRZ border in the proposed investment deal.

In a presentation prepared for county commissioners, Hutto city officials put a $15.5 million preliminary plan price tag on the public improvement work, including $10 million that is expressly earmarked for the creation of public parking.

The proposed deal pitched to county commissioners Dec. 5 would invest up to $5.5 million in the Co-Op District infrastructure projects. Williamson County would also sell an existing building on the Co-District property to Hutto in exchange for an appraised value price during a 24-month option period.

Hutto City Manager Odis Jones told council members Thursday he would likely come back to the chamber at a later date with a request to approve a public improvement district, or PID, on the Co-Op District property. A PID is another public improvement tool—a loan paid back by revenue from the assessed value on the improved-upon property.

“If the city isn’t making enough from the TIRZ to pay the debt amount, the PID will come in,” Jones said.

Hutto would additionally resume responsibility for maintenance on drainage ditches from homeowners associations in the city limits. Mayor Pro Tem Tom Hines said HOAs have approached the city about this issue in the past.

The city will ask Williamson County for less than 40,000 square feet of property for an easement for roads and drainage near the Co-Op District property.