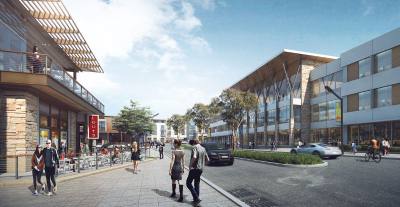 At the end of its build-out, The District will be Round Rocku2019s first mixed-usendevelopmentu2014featuring residential spaces, Class A offices, restaurants and retail.n

Mark IV Capital and the Round Rock Chamber announced plans for the massive mixed-use development project The District Nov. 8.

The $200 million private capital project will be the first undertaking of its kind in Round Rock—a live, work and play community boasting amenities for tenants, residents, shoppers and tourists. Initial specs for the development show plans for a grocery store, a hotel, office and retail space, close to 1,000 residential units and numerous pocket parks.

“I thought it was a great project for Round Rock because it’s like nothing we currently have,” Round Rock Mayor Craig Morgan said.

California-based development firm Mark IV first began shopping the Greater Austin metropolitan area as early as 2008. The company, which has development projects spread across five states, surveyed the area due to its exceptional growth, particularly among young professionals. Eventually, Mark IV executives settled on investing in Round Rock.

“The more we looked at [the Austin metro], the more we realized the growth would occur in the north,” said Paul Cate, president and CEO of Mark IV.

Mark IV has since broken ground on Summit II at La Frontera off Hesters Crossing Road, which the company expects to open  in April. That property was bought along with the adjacent Summit I office building by Mark IV in 2013.

The development firm has had its eye on The District’s 65-acre grassland property east of Target for the last handful of years and bought the land, previously owned by Dell, last year.

Discussions on the property had been held for at least three years prior to the closing of the property, according to Ben White, Round Rock Chamber vice president of economic development.

“It took us a while to make sure the city and developer were on the same page,” White said.

Mark IV officials last year presented their plans for the property to city officials during the early negotiation process, introducing a proposal on the mixed-use development.

In February, the Round Rock Chamber commissioned Garner Economics LLC for a Round Rock market study and action plan. The survey found in August that the city needed two vital components if it wanted to sustain growth and solidify its tax base: high-end office space and mixed-use developments.

As it stands, there are several Class A office spaces, generally considered high-end offices in desirable locations, being built inside Round Rock city limits, including Mark IV’s own Summit II at La Frontera building. The District will open years after that  building does, but Cate relayed the development will house 1 million square feet of Class A office space when the last construction crew leaves the site.

City officials and the Mark IV team plan for a diverse ecosystem of businesses to move into and operate within The District’s borders. Still in its infancy of planning, the development team for the project is working to secure a hotel, a medical office and financial firms, among others.

Cate said he is looking at bringing a high-end grocer into The District and named Whole Foods Market, Trader Joe’s and the H-E-B offshoot Central Market as possibilities. The Mark IV leader also expressed interest in bringing in artisan grocers, such as delicatessans, butcheries and bakeries.

Both City and Mark IV officials cannot help but bring up the ever-present tech industry when they talk about filling the office spaces and residential units at The District.

“We think there’s a big demand by tech users in Austin,” Cate said.

Craig Morgan and White both believe Round Rock has already established itself as a tech destination, and Mark IV has engineered floor plans at the site to allow certain tenants to come in and occupy large swaths of office space. The belief among all parties is The District can help draw in the golden goose of economic development: tech headquarters.

“Tech companies will start to call upon us,”  White said. “[The District] will give us the opportunity to recruit companies that are growing with the millennial workforce.”

All of the tentative plans are aspects of the mixed-use presentation the development team pitched to the city and the chamber throughout negotiations.

At the outset, Mark IV has plans for 900 residential units to occupy The District, all of which are multifamily apartments or lofts. Cate relayed that he wants the units to span the range of affordability and has even included discussions on “makerspaces,” or lofts connected to work and gallery space for local artists and photographers.

In 2010, Round Rock published the results of a public input survey conducted to identify goals and objectives for the city’s General Plan. According to the survey, 65 percent of Round Rock residents agreed that mixed-use residential developments were a “good idea” for the city. Additionally, 47 percent of respondents reported they were likely to move into such a development.

Round Rock City Council voted Nov. 9 to approve the memorandum of understanding between the city and Mark IV on The District development.

Negotiations on the official development contract are ongoing and the MOU agreement is nonbinding, meaning either party can walk away from the deal with no penalty. However, the language outlined in the MOU proposes how the city can pay for the necessary infrastructure improvements on and around The District property.

If the MOU is to be followed, Round Rock may turn to a sparsely used utility in its toolbox—a public improvement district, or PID—to foot the bill for the necessary infrastructure improvements to the tune of $10.8 million.

“The PID would be a mechanism to secure the city’s interest and secure the development on an agreed upon timeline and capital project,” said Susan Morgan, chief financial officer of Round Rock. Susan Morgan has no relation to Craig Morgan.

Craig Morgan said he can only recount a few times in Round Rock’s past when a PID was used. Round Rock has only used three PIDs since 2011 and dissolved another in 2015—but the mayor pointed to Mark IV’s capital investment figure as a motive for the public-side contributions.

“It helps improve the area that you are building. It is really more to get this capital investment moving forward,” Craig Morgan said.

Round Rock Transportation Director Gary Hudder said his team has not yet had any detailed discussions with city officials and developers about the project, though he has already brainstormed a few necessities for the site, such as new signals and deceleration lanes.

“All we can do then is make sure we’ve done our job and address the things of concern,” Hudder said.

“The size of a project isn’t necessarily a concern at all; it’s understanding what traffic is generated and how we can manage it,” Hudder said.

The transportation director does concede The District’s unique mixed-use residential plan does present a distinct challenge. Typically, the department would analyze the traffic impact of The District’s components on an individual basis. For example, the effect of a grocery store on a road’s traffic flow is drastically different than how offices would affect traffic on that same road.

“The unique thing for us, frankly, is the residential component,” Hudder said. “The theory is that people won’t leave the development on a daily basis. That is actually a benefit to us because that’s not someone getting out on a road.”

The developers have added plans for nightlife, exercise facilities, pedestrian accessibility and numerous parks throughout The District—all components aimed at keeping residents and workers in the space, night and day.

Still, the city wants to employ public transit as a strategic option moving forward with The District.

“We have bus routes that come right by that project, so that if there are people who move here that still work in Austin, they have access,” Craig Morgan said. “Even though we’re a suburb of Austin, we’re not just a bedroom community.”

Round Rock’s Transportation Department will soon get a seat at the table to help plan and design the overall project alongside other city entities like the planning department and the fire department.

“We’ll have a big voice in how this comes together,” Hudder said.

For now, legal teams from Mark IV and the city of Round Rock are ironing out a contract to send over to City Council for approval. Cate said they will be working with the city at the beginning of the new year to get work on the contract done.

“There’s still a lot of work that has to be done for a development of this size and scope,” said Justin Basie, regional vice president for Mark IV.

Soon afterward, the Round Rock Chamber and Mark IV will work to fill The District’s office and retail space. White declined to comment on any negotiations the chamber is holding with any companies.

Although the project is not on an accelerated track, all of the involved parties report they are eager to get work started on The District. Both Cate and Craig Morgan commented they would like to “move forward quickly” on the development.

“But we want to make sure it’s getting done right,” Craig Morgan added.
SHARE THIS STORY