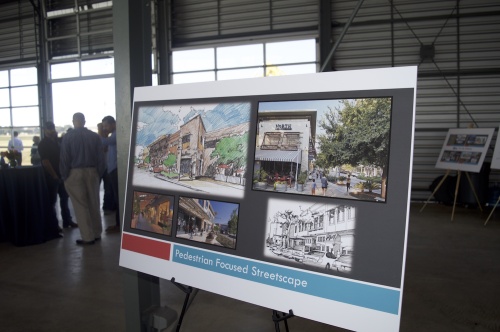 The city of Hutto broke ground Nov. 2 on mixed-use development The District Co-Op.

Williamson County ultimately chose not to take steps toward an economic development deal with Hutto Tuesday morning when commissioners did not take action to create a tax increment reinvestment zone for the Hutto Co-Op District development.

That is not to say commissioners will not choose to pursue the deal in the next few months, they said. Precinct 4 Commissioner Larry Madsen, who represents the portion of the county surrounding the Hutto Co-Op District development, said there are still details to be worked out between Williamson County and city of Hutto attorneys before commissioners will feel comfortable taking a vote.

"We want to move ahead, it's just about getting the final details worked out," Madsen said.

The Co-Op District would be a mixed-use, walkable development with retail, high-density residential, entertainment, restaurant, civic and office components on a 25-acre plot of land. It will be located on what is known as The Gin property, about 25 acres north of Hwy. 79 and west of downtown Hutto, which the city bought in 2004.

A tax increment reinvestment zone, or a TIRZ, is an economic development tool in which a public entity or private developer invests in public infrastructure in an area. To repay the debt, the future owners or tenants within the zone pay portions of the future property tax revenue derived from within the TIRZ district. A county can create a TIRZ, but only a city can issue the bonds.

As part of the proposed deal, the county would contribute up to $5.5 million, or half of the incremental tax increase they would receive over the 20-year term of the project, to provide funds for a road and storm drainage system to be built. Williamson County would sell an existing building at the development to the city in exchange for an appraised value price during a 24-month option period.

Two Hutto ISD school board trustees spoke on behalf of the tax increment. President Connie Gooding and trustee Terrence Owens said having the Co-Op District would create jobs, provide family friendly activities for area residents and allow the school district to bring in more tax dollars in a time when state funding for school districts is decreasing.

“The school district has had massive growth, and we have some catching up to do,” Gooding said. “We’ve been that sleepy little town for a long while. This would give us the opportunity to have a full-service library for every generation, from the youngest reader to the oldest.”

The Co-Op District could have immediate effects for Hutto students, Owens said, in the form of first-time jobs for high schoolers.

“[It would be good] for them to be able to have jobs, stay out of trouble and not drive to Austin or Pflugerville or anywhere else to work and keep those dollars in town,” Owens said.

Critics of the TIRZ insisted the county had more important priorities to spend money on, such as building bridges for residents to use during floods and improving the emergency response times for county departments.

It seems that Williamson County commissioners do not agree.

“My opinion is this commissioners court wants to do the deal with you [Hutto] really bad,” Judge Dan Gattis said. “We have to get the I’s dotted and T's crossed to get us there.”