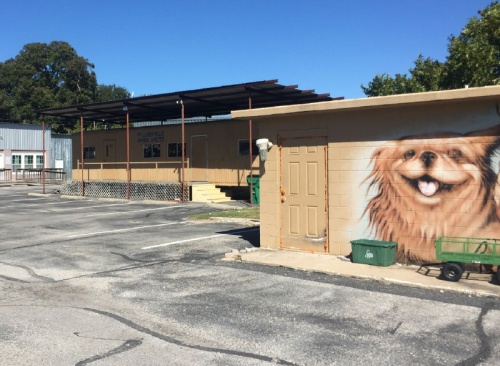 The mission of the Pflugerville Animal Shelter received a boost in late September when Pflugerville City Council approved construction of a new 5,800-square-foot intake center.

The city’s current shelter has been too small, city officials have said for years, running at full capacity with old buildings.

The shelter is operated by Pflugerville Animal Welfare Services—or P.A.W.S.—which also tries to reunite lost pets with owners in the city through its Facebook page. P.A.W.S. falls under the auspices of the city of Pflugerville and is supported by city funds in each year’s budget.

The new facility will cost $2,042,997, which is less costly than bids received at the beginning of the year.

City Manager Brandon Wade said he worked with Assistant City Manager Trey Fletcher to find reductions that would not mean reducing the size of the building.

“They would request another facility soon,” Wade said. Sacrificing the quality of building materials was not an option either, Wade said, because cutting costs now would mean likely repairs in a few years.

In June, Animal Shelter Director Rhonda McLendon told City Council that changes in the shelter, service and adoption policies significantly reduced the length of a dog’s stay at the shelter by 92 percent and a cat’s stay by 82 percent compared to 2016. A dog that spent 180 days at the shelter in 2016 was now there just 14 days in 2017.

Although the new shelter will come online because of the City Council vote in September, McLendon said there are other issues the city needs to address as the population grows.

The shelter fee structures are likely to change from the current $20 impound fee and $5 per day boarding fee. By raising the boarding fee and charging to microchip animals that end up at the shelter, the city can recover the cost of the services. Currently those services are provided at a loss.

The impound fee increases each time an animal is picked up and returned to the shelter.

“If they are a pet, they are usually claimed in one to three days,” she said. “Sometimes it’s a door left open, and it escaped.” Pflugerville City Council will be working with McLendon on other issues beyond fees. She said the city has no limit on dogs and cats for homeowners, but some cities such as Georgetown have a limit of five dogs. Leander and San Marcos allow four dogs plus three cats.

City Council Member Mike Heath said he would like to look at establishing a number to help with enforcement, safety and sanitation.

The number of dogs and cats per property will be discussed at an upcoming meeting.

Also, on Oct. 24, McLendon asked the council to consider an ordinance regarding animals beyond dogs and cats in the city.

State law limits dangerous animals including lions, tigers and bears, but McLendon said nothing on the books in Pflugerville prohibits the number of cows, pigs, chickens, goats, elephants or snakes residents can have. And although Homeowner Associations may have restrictions, they are not enforceable by the city.

“We’ve even impounded an alligator in Pflugerville,” McLendon said. “And ostriches and emus are dangerous to deal with if they get loose.”

Mayor Victor Gonzales said he felt the city has not been negligent in establishing ordinances regarding animals, but it is time to put it in the forefront as the population increases.

McLendon, with a new shelter coming soon, will report back with recommendations to City Council in November.
SHARE THIS STORY