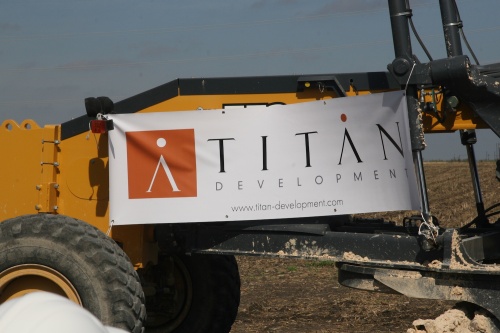 The City of Hutto celebrated the beginning of the first phase of construction on Titan Development's Innovation Business Park Monday.

The City of Hutto broke ground on Titan Development’s Innovation Business Park Monday afternoon, three weeks after the city broke ground on an infrastructure project essential to the development.

“Ready-to-move-in speculative buildings have been one of the criteria businesses look for when they consider coming to Hutto,” said Hutto Mayor Doug Gaul.

Initial construction on the project will bring a 100,000-square-foot speculative building to be completed in nine to 12 months, according to Kevin Reid, chairman for Titan Development. Documents made available by the City of Hutto claim the first building will be made available for occupancy Spring 2019.

Some businesses have expressed interest in leasing one of the development’s build-to-suit buildings, a structure built specifically for one company, according to Reid. The Titan Development chairman said that businesses that could potentially fill those spaces include light manufacturing plants or distribution centers.

“This is the most exciting project [Titan Development] is working on,” Reid said.

The groundbreaking event Monday bookends a busy month of development ceremonies for the City of Hutto. Four days prior the city broke ground on the first phase of the Co-Op District development, which will bring retail spaces, restaurants, an entertainment venue, luxury apartments and more to Hutto.

“We are taking steps to diversify the local economy and move Hutto forward,” Gaul said Monday.
SHARE THIS STORY