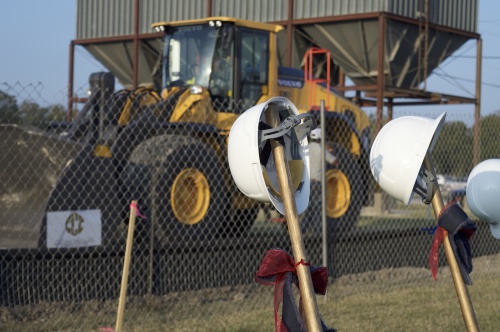 Construction equipment sits in front of a historic structure at the Gin at the Co-Op in Hutto. Groundbreaking on the Co-Op District, a mixed use development, took place Nov. 2.

The City of Hutto broke ground on the first of two major development projects Thursday, officially beginning one part of the process of diversifying Hutto’s economic future, according to city officials.

Hutto residents, city officials and developers gathered at the Gin at the Co-op District to officially begin construction on the Co-Op District, a 500,000-square-foot complex that will feature a movie theater, a community event center, retail, restaurants and more.

“Essentially, it’s going to be the Domain, but the right size for Hutto,” said Hutto City Manager Odis Jones.

Construction at the Co-Op District property will commence Monday, beginning with the demolition of slabs at the southern end of the property’s lawn. Work will begin on the process of moving the site’s iconic cotton silos to other locations on the property.

According to the site’s lead developer Robert Wunsch, the silos can’t be moved if wind gusts over 10 miles per hour are encountered on-site.

The Co-Op District will be the new home for Hutto City Hall, a 2-story, 40,000-square-foot building located on the far northern end of the development. Currently, plans are for the construction on City Hall to go vertical in April and a move-in date is set for December 2018.

Construction on essential infrastructure for the Co-Op District will begin simultaneously to construction on Hutto City Hall. This includes the creation of several roads and the demolition or renovation of existing road stock. Additionally, there are plans for the erection of two parking garages in this first phase of construction.

Three storage basin lakes, totaling over 200,000-square-feet together, will be created at the western edge of the development to aid with drainage.

Concept designs of the Co-Op District also show building spaces for luxury apartments, restaurants, retail and office space, a movie theater, a hotel and conference center, a bank and an open-air plaza with an event stage located on the west end of the plaza lawn.

The completed project, according to Hutto officials and developers, will provide a “live-work-play” space for Hutto residents and prospective tenants.

“Our goal is to have an 18-hour entertainment district,” Wunsch said at the event.

But the renovation of the space at the Gin at the Co-Op also promises to diversify the town’s economic profile, according to Bill Gravell Jr., Williamson County Precinct 3 justice of the peace.

“This will be the cornerstone of Hutto for future economic impact,” Gravell said. “[Hutto] has residential spaces. We have great roads. The one major piece we don’t have is major commercial development.”

Now, the city, the developers and leasing agents all turn to looking to fill the Co-Op District’s buildings with a diverse blend of retail, restaurant and office tenants.

“When citizens hear what businesses are coming here, they’re going to say ‘Wow.’ Businesses that are all south of us are now going to be in Hutto,” Gravell said.

The groundbreaking ceremony was the second such event in recent weeks. Construction on Schneider Boulevard, a roadway that will link Innovation Boulevard to the eastern part of Hutto, broke ground on Oct. 17.

Furthermore, Hutto officials now turn their attention to the groundbreaking of the Innovation Business Park, which will take place Nov. 6. Titan Development, an Albuquerque-based real estate developer, will build a $100 million speculative building in the first phase of that project.
SHARE THIS STORY