CAMPO policy board reappoints chairman Will Conley amid legality concerns 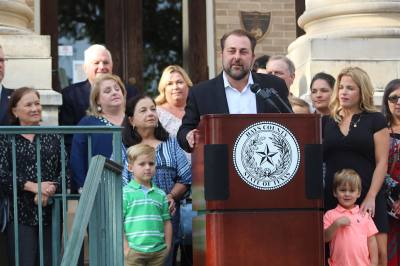 Will Conley announces his campaign for Hays County judge in 2018.

The Capital Area Metropolitan Planning Organization’s Transportation Policy Board voted in a 15-1 vote with two abstentions Jan. 8 to appoint current Chairman Will Conley as an “affiliate non-voting member” as well as chairman of the organization for an additional two years, for a total of six years on the board.

Travis County Commissioner Brigid Shea questioned the legality of Conley’s appointment because he is not currently serving as an elected official in Hays County. On Oct. 10 Conley announced his campaign for Hays County Judge and stepped down as Precinct 3 Hays County commissioner. She also voiced concerns over Conley’s previous decision-making on public transit.

“For me it really is a question is what is the best way to govern on complicated transportation issues in this region. It has been an enormous concern to me that this body seems to have either hostility or a dislike of transit,” Shea said.

Conley and supporters of his appointment said because he was an elected official when he first joined the organization, he is still legally allowed to serve as chairman under federal law. They also said there were no laws indicating that the organization cannot have non-voting affiliated members. Conley said he still has the support of the Hays County Commissioners Court to continue to serve on the CAMPO board.

Travis County Judge Sarah Eckhardt made an amendment to Conley’s motion to serve as an “affiliate non-voting member” and chairman of the organization, requesting that a separate vote be held in February to appoint the vice chairperson. She and other members of CAMPO, including Conley, voiced support for an opportunity to vote for Precinct 2 Bastrop County Commissioner Clara Beckett, who did not attend the Jan. 8 meeting, as vice chairwoman.

CAMPO approved the delay of the vote for vice chairperson to February.

The vote on Conley’s role came after public comment from two individuals in support of his appointment and two in opposition, including a representative of Austin’s Save Our Springs Alliance who said the appointment was illegal. Supporters included Drew Scheberle from the Austin Chamber of Commerce and Geoffrey Tahuahua of The Real Estate Council of Austin, representing commercial real estate interests.

“The times that we’re in right now given the matters we are about to be briefed on with respect to getting state and federal dollars would indicate that he would be our most effective chair moving forward on those conversations,” Adler said. “Frankly, there are probably rooms that you could get into that some of us wouldn’t be able to get into.”
SHARE THIS STORY