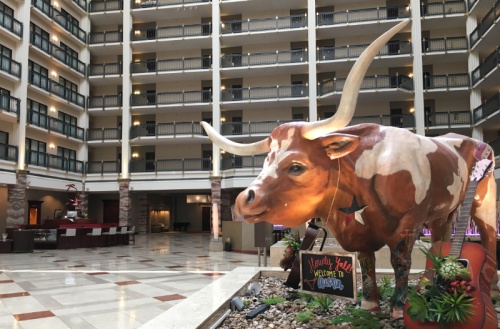 As companies continue to relocate or expand in Austin, bringing thousands of new residents, the city’s hotel industry is responding to a demand for more rooms.

In Northwest Austin, the area’s tech corridor along US 183 and Parmer Lane is helping spur that demand, said Tim Douglas, general manager of Staybridge Suites on US 183.

“For us here specifically Staybridge is an extended-stay product, so we try to capture when we can folks that are relocating here, say, from other cities where companies are maybe moving into the Austin area and folks are relocating for those roles,” he said. “We see a good piece of our business from that component.”

A total of eight new hotel projects in Northwest Austin—four located near The Domain—are making their way through the city of Austin’s permitting process; another one is under construction; and the Staybridge Suites recently completed a $2.3 million in-depth renovation that Douglas said will help the hotel stay competitive with newer projects.

As these new hotels come online, existing hotels are looking to keep their rates steady, including at Aloft Austin Northwest, which is about to have a competing hotel open nearby off SH 45 N. To stay competitive, Aloft’s Director of Sales Amanda Wheeler said the hotel will be analyzing its rates.

“Hilton Garden Inn will be a major competitor, so we have to keep rates high to maintain the same strategy,” she said. “It helps everyone to keep a higher rate. It’s an exciting time to be in the hospitality industry in Austin.”

Of the nine new hotel projects, two are from a Texas company called Lodgic Hospitality, which built the Comfort Suites on US 183 between Anderson Mill Road and Lake Creek Parkway about 19 years ago. In the past five years the company has built two more hotels, the Aloft Austin Northwest and Home2 Suites Austin/Cedar Park at US 183 and Lakeline Boulevard.

Lodgic Hospitality plans to start construction Oct. 1 on its fourth hotel in Northwest Austin, a Spring Hill Suites in the Anderson Arbor shopping center next to Main Event. The five-story, 99-room hotel will take about 14 months to construct and cater to both the corporate and leisure traveler.

“There’s a lot of leisure activity that comes from Lake Travis into the Lakeline area,” said Andy Patel, who is an asset manager and investor with Lodgic Hospitality. “It’s close access to Round Rock and the sports tournaments; that’s a good draw. Since we’re going after the corporate and leisure business, we felt it is good proximity to all the office buildings.”

The company’s fifth hotel will be a Hilton brand called Tru. Patel said a property became available on Jollyville Road at Duval Road behind the Chuy’s and his company purchased it.

“It’s been a long time since any hotel development was completed that close to The Arboretum,” he said. “A lot of neighborhood plans make it tough for new development to happen in that corridor.”

The site has two different zoning categories, so the parking lot will be located on top of the limited office zoning, and the four-story, 124-room hotel will be built on the general retail zone.

Besides demand from corporations, another factor that is paving the way for new hotels is the cost of land.

“The biggest driver is the availability of land in the Northwest area,” Patel said. “Sites are still pretty decently priced outside of downtown and The Domain where you’re seeing all-time highs. You’re still able to find land at a decent price [in Northwest Austin].”

“We’re seeing more hotels because all of the fundamentals for hotel development and ownership remain strong in Austin,” he said. “Austin as a whole has had a reputation—we liken it to the ‘Field of Dreams,’ referring to the movie: ‘If you build it they will come.’”

Occupancy rates citywide remain above 70 percent, and if that rate drops with new supply coming in, Binford said it is not necessarily a bad sign.

“People see occupancy fall a point or two and say the sky is falling when in fact occupancy is dropping for the right reasons,” he said. “How can this be good? It means that occupancies are healthy enough folks are reinvesting in that real estate type in that market.”

When supply outpaces demand that is a sign of oversaturation, Binford said, but the city is not to that point.

Rob Gillette, who has been manager of the Renaissance Austin hotel at The Arboretum for 12 years and spent years working at downtown hotels, said the city’s hotel industry really took off in 2005.

“The University of Texas won the national championship for football,” he said. “You could look back to that year and the national exposure of that exciting championship win and what that did for the city. That was a launch milestone that I think was a difference maker in terms of the awareness of Austin.”

Besides a rising tech sector, Gillette said Northwest Austin remains a hot market for hotels because of its location as the center of the region and proximity to downtown, Lake Travis and area attractions such as iFLY indoor skydiving and TopGolf.

“The Domain development has been tremendous for Northwest Austin because of the retail and opportunities for office buildings,” he said. “People don’t have to be downtown. Downtown is great, but this has been a significant alternative to that.”

Farther north in the Lakeline area, Tyler Roberts, general manager of the Home2 Suites near Lakeline Mall, said the hotel, which opened five years ago, has filled a void in the market.

Recently, though, as new competition comes in, the hotel is now looking to maintain relationships with corporations that contract with the hotel for frequent bookings, said Blaize Kiezer, the director of sales at Home2 Suites.

“A lot of them are already established, so it’s maintaining the relationships we have with the clients and being present and meeting with them on a quarterly basis,” she said.

The rise and popularity of short-term vacation rentals has also had an effect on the hotel industry by offering more options for travelers. Kevin Locraft, vice president of partner success at Austin-based HomeAway, said the travel industry is massive. A report from the Deloitte Center for Industry Insights stated the global travel industry bookings topped $1.6 trillion in 2017.

“[Vacation rentals] are only 1/16 of the total travel industry,” he said. “The opportunity here is massive, and the coexistence of vacation rentals and hotels will always be here.”

HomeAway, which allows travelers to find vacation spots online and property owners to post their own homes to rent, is able to fill a niche for families, large groups and those who travel with pets, Locraft said.

Austin hoteliers say vacation rentals do have some impact on their sales but that these other options are not always an issue. Where hotels are able to be more competitive is with either one to two travelers who only need a room one to two nights. With larger groups and longer stays, that is where vacation rentals can stand out as a better deal, Locraft said.

“[Vacation rentals] essentially shift the share that we would typically get from travelers,” Douglas said. “It’s great that travelers have more options of course, but as a hotelier we obviously want that business.”

In Austin, Roberts said the downtown hotels probably feel more of the effect of vacation rentals.

“Austin has strict regulations, so that has helped us a little bit,” he said. “They take some business, but it’s not really competition.”

Editor's note: This post was updated to state that Tru is a Hilton brand.