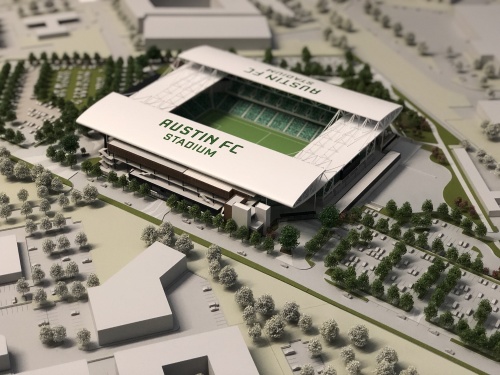 After being forced by the Texas Third Court of Appeals to amend the language on one of its citizen-initiated ballot propositions earlier this month, the city of Austin on Aug. 28 caught a favorable ruling from the court over challenged language on the McKalla Place stadium deal proposition.

Justice Thomas Baker of the Third Court of Appeals denied petitioner Sharon Blythe's challenge to the language Austin City Council voted to place on the November ballot proposition. Blythe and her legal team can appeal this ruling.

Blythe's lawsuit accuses the city of using “poison pill” language in the ballot proposition for the McKalla Place stadium deal.

Legal team Husch Blackwell LLP on Aug. 23 filed a request for oral argument on behalf of Blythe that states Austin City Council made “significant, substantive changes to the proposed ballot language” in the petition challenging the deal, according to court documents.

In December 2018, Austin FC and the city of Austin reached an agreement for a lease on the stadium that will give the city ownership of the stadium and keep the professional soccer franchise from having to pay taxes on the property. Austin FC in return agreed to fund construction of the $225 million stadium and pay $550,000 per year in rent beginning in year 6 of the deal.

Austin FC is set to break ground on construction of the stadium on Sept. 9, according to an Aug. 28 email from the Major League Soccer team. That date was pushed back by four days due to unforeseen scheduling conflicts, the team said in the email.

Local advocacy group Friends of McKalla collected 26,441 valid signatures in January 2019, effectively forcing the city to place a petition challenging any city deals that would give away, sell or lease property for sports or entertainment venues on the upcoming November election ballot. According to the lawsuit, Blythe was one of the signature of the petition.

Friends of McKalla is not involved in the lawsuit, but the group put out a news release on Aug. 26 praising the filing, calling the ballot language “a blatant attempt to confuse and distract voters.”

“I’m so disappointed with this abuse of the ballot language, and I applaud Ms. Blythe for her courage and conviction to bring this lawsuit forward. When I signed the stadium petition, I had the expectation that we would vote on this specific ordinance as did thousands of other voters,” said Francoise Luca, a member ofFriends of McKalla, in an Aug. 26 news release.

City Council has the option to adopt the proposal as written in the petition, or call a referendum to let the voters decide. With the mayor and a number of council members coming out against the 2019 petitions, they chose to leave both questions to an election.

Blythe's lawsuit is the second challenge to ballot language that the city of Austin has fielded in the past two weeks.

The city was forced to clean up its ballot language on the other citizen-petition proposition on November’s referendum after Third Court of Appeals Chief Justice Jeff Rose ruled in favor of local NAACP chapter president Nelson Linder and attorney Fred Lewis.

Lewis said City Council in the original draft language for the ballot question muddied the intent of the petition’s proposed ordinance.

More than 24,000 Austin voters signed a petition earlier this summer asking whether voters should have a say before the city moves forward with any convention center expansion costing more than $20 million, and whether the city should overhaul its formula to spend its hotel tax revenue. That initiative was placed on the November ballot as Proposition B.

City Council on Aug. 29 is holding a special meeting to possibly amend the language used in the propositions. Ballot language has to be finalized by Sept. 5.
SHARE THIS STORY