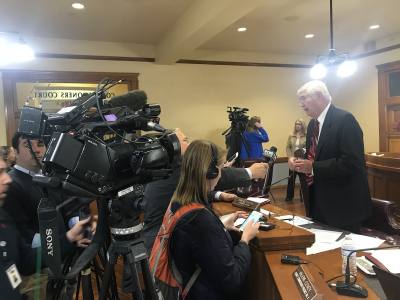 "We want them to come here," Commissioner Valerie Covey said. "It's a good thing for the county. What wouldn't be good would be if it went across the county line and we had all the people [working there] and none of the tax revenue.

The agreement, known as a Chapter 381 economic incentive agreement, was approved unanimously after representatives from area economic development organizations and Apple spoke before commissioners, touting the benefits of the deal for local taxing entities.

In exchange for investing $400 million in purchasing the land and developing the campus as well as creating 4,000 new jobs, Williamson County would abate or reimburse 65 percent of ad valorem taxes for real and business personal property for 15 years totaling $16 million in reimbursements to Apple, according to the proposed terms of the agreement.

“Everyone came together to see the greater good," said Ben White, director of of economic development for Cedar Park speaking on behalf of the surrounding communities involved in the agreement. "It's a unique situation we find ourselves in in Williamson County. We all play together, we all win together.”

He said the deal took a year to broker and was largely influenced by the quality of area school districts such as Leander ISD and Round Rock ISD. Apple began a private, nationwide search last year around the same time that Amazon publicly announced it was searching for a location for its second headquarters, White said.

Critics of the deal have pointed to the area’s transportation challenges, however Commissioner Cynthia Long said she was able to use this deal as leverage for fast-tracking transportation improvements on Parmer Lane that she has been eyeing for six years, including managed lanes, added turn lanes and removal of stop lights.

“Events tend to shape timelines. This decision today I believe is going to shape this timeline in terms of moving this ahead and get moving yesterday,” Long said.