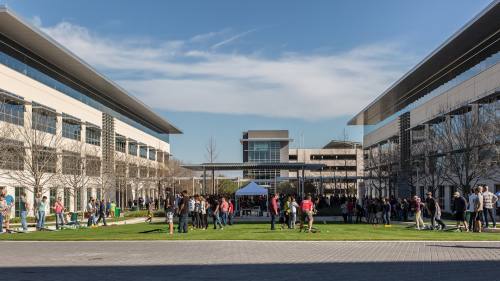 A second Apple campus in Northwest Austin is expected to bring significant economic growth to the northern part of the city and suburbs as well as enhance the region's tax base.

"What we know when we look at the tax base is when you have significant commercial development it really helps fund all of the other things the community is asking for: transportation improvements, parks improvements and frankly helps keep the tax rate a little bit lower, especially when the city is not giving a subsidy to this campus,” said Jimmy Flannigan, City Council member for District 6, which is where the new Apple campus will be located.

Flannigan said Apple not seeking an incentive agreement with the city for its next expansion is a testament to the value of Austin for corporations.

“The Domain is an example where Phase 1 came with a subsidy, but then Phase 2 and 3 have not required a subsidy,” he said. “It shows that there is a value in the city participating in the first stage of an expansion but the future expansions likely don’t need that level of assistance because the relationship is better, the community is stronger.”

A rendering of the site supplied by Apple shows the campus will be located on 133 acres of 8,000-acre Robinson Ranch property northeast of the intersection of Parmer and McNeil Drive.

“Those of us that drive on Parmer Lane in the morning as a lot of District 6 does knows that the northbound side of Parmer is empty in the morning,” he said. “Creating jobs in areas that can leverage all of that empty pavement with some contraflow traffic I think can be a real benefit to the district."

Flannigan said he also does not want residents to think 5,000 new jobs equates to 5,000 vehicles on the road because Apple has also been a proponent of working from home and telecommuting.

“What’s exciting about the build out of Robinson Ranch—amongst the things that are concerning because a lot of growth can also be hard to accommodate—but is the opportunity to in the future add an infill station on the Red Line because the tracks run through the back of the Robinson Ranch property and [add] a level of density that would support actual substantive transit services for District 6,” he said.

Apple announced early Dec. 13 it plans to invest $1 billion to expand its Northwest Austin operations center by building a second campus as well as build other sites in Seattle, San Diego and Culver City, California.

“Apple has been a vital part of the Austin community for a quarter century, and we are thrilled that they are deepening their investment in our people and the city we love,” Austin Mayor Steve Adler said in a news release. “Apple and Austin share a creative spark and a commitment to getting big things done. We share their commitment to diversity and inclusion. We’re excited they are bringing more middle-skilled jobs to the area. And we’re particularly gratified by their commitment to providing a great place to work for a large and growing number of America's veterans.”

The tech company already operates its 1 million-square-foot Americas Operations Center on 38.8 acres at 5501-5505 W. Parmer Lane, Austin in the Riata Vista Office Complex in Travis County. Construction began in 2012 and was completed in June 2016.

"Apple’s vision on innovation, quality and simplicity align with the values here in Williamson County,” Williamson County Director of Administration Rebecca Clemons said in the news release. “We are both committed to continued job creation and outstanding quality of life. This new expansion is a perfect example of the astounding growth and opportunity that are possible when a company and a community work together.”

Apple plans to hire 5,000 new employees initially at the new site but could grow to 15,000 employees, making it one of the largest private employers in the city, the release stated. Apple created about 3,6000 new jobs at its existing campus. The new jobs will be across a range of fields, including operations, finance, sales, customer support and research and development, according to Apple.

“Apple is proud to bring new investment, jobs and opportunity to cities across the United States and to significantly deepen our quarter-century partnership with the city and people of Austin,” Apple CEO Tim Cook said in a news release. “Talent, creativity and tomorrow’s breakthrough ideas aren’t limited by region or zip code, and, with this new expansion, we’re redoubling our commitment to cultivating the high-tech sector and workforce nationwide.”

To build its existing campus Apple invested $304 million and received an investment of $21 million through the Texas Enterprise Fund, which was created in 2003 to attract businesses to the state. Austin City Council also approved a 10-year, $8.6 million incentive and economic development agreement with Apple in 2012.