Hi, How Are You Project celebrates Daniel Johnston's life and encourages conversations on mental health 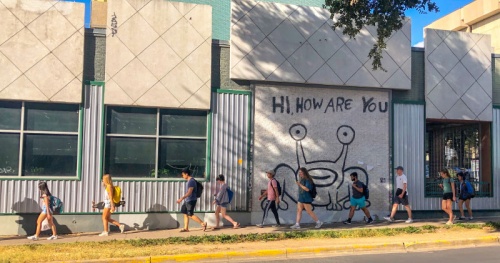 On Jan. 22, 2018, Daniel Johnston’s 57th birthday, the Austin music and arts community came together for the first Hi, How Are You Day. Inspired by local musician Johnston, who dealt with mental health challenges throughout his life, Austinites were encouraged to check in on each other and talk about what weighed on them. A concert featured a lineup of Johnston and other local artists, and afterwards, Hi, How Are You Day co-founders Tom Gimbel and Courtney Blanton remembered an outpouring of support coming in from around the world.

That 2018 concert at the Mohawk on Red River Street would be Johnston’s last live performance, according to Gimbel. After Johnston died on Sept. 11, 2019, fans left candles, cassette tapes and notes at his “Hi, How Are You?” mural at 21st and Guadalupe streets.

Gimbel, the general manager of the “Austin City Limits” television show and Johnston’s manager since 1993, said Johnston’s emotional sincerity and openness about his struggles are part of what made his work resonate.

“I think it’s Daniel’s courage and his honesty in songwriting. All artists wish that they could have that type of ability to just be so open and connect with emotion in such a raw way,” Gimbel said.

The Hi, How Are You Project hopes Johnston’s legacy will inspire open discussions about mental illness. Blanton said she wants the next step to be even more specific interactions and research.

“There are so many amazing artists out there talking about how it’s OK to not be OK. I want to have the conversation about, ‘Why is it that you’re feeling that way?’” she said.

The third annual Hi, How Are You Day is scheduled to take place Jan. 22 at ACL Live at the Moody Theater, but the foundation is doing more than just planning the event. The Hi, How Are You Project is also working with businesses; schools; and groups, such as American Campus Communities, to teach people how to talk about mental health issues with students, coworkers, family members or friends.

There is a misconception, according to Blanton, that expertise is always needed to have those challenging discussions, but she said as Johnston’s mural signifies, sometimes just checking in and asking “Hi, how are you?” can make a difference.