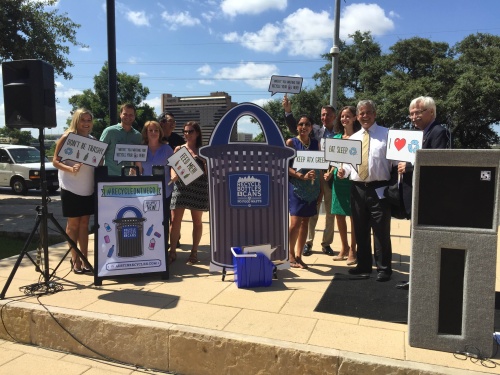 Recycle on the Go by Austin Resource Recovery will expand from two city street corners to eight in next weeks.

A pilot program providing recycling cans on downtown street corners will be expanded from two corners to eight over the next week.

The program, which began in June 2014, will continue to expand through downtown Austin over the next three years. Mayor Pro Tem Kathie Tovo of District 9 said she looks forward to the program going city-wide in the future.

"I hear a lot from my constituents that they want more opportunities to recycle. They want to help Austin achieve its really bold goal of zero waste by 2040," Tovo said.

"Pedestrians downtown wanted a recycling opportunity and we found a little bit of contamination but quite a bit of success in the use of these containers," Gedert said.

Gedert had special instructions for coffee drinkers who wish to recycle. He asked for styrofoam or non-recyclable paper cups to be thrown away but the sleeves and plastic lids to be placed in the recycling container.

Downtown garbage cans will now feature a sticker indicating that trash thrown away in that can will go to a landfill, Tovo said. The sticker will create awareness and hopefully cause people to make wiser recycling choices, she said.

Under the Universal Recycling Ordinance, all properties must provide recycling services to tenants and employees by Oct. 1, 2017.