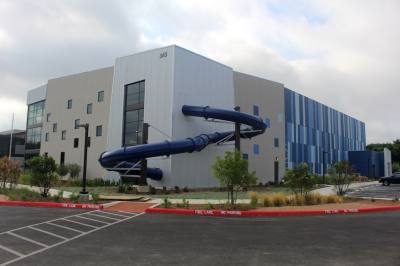 The signature feature of the rec center is a water slide that loops outside one corner of the building and leads to a leisure pool with three lap lanes, a resistance channel and a childrenu2019s pool area with a spray feature.

Stacey Dicke, director of New Braunfels Parks and Recreation, said the opening date will kick off a “no-cost” weekend where the community can try the facility out for free.

New Braunfels ISD kicked in an additional $2.2 million for Das Rec’s 25-yard, eight-lane competition pool, which will provide a home for the district’s swim teams. The New Braunfels 4B Board funded an additional $5.8 million that went toward aquatics and an additional gym. Dicke said as of Tuesday, the project was slightly under budget.

“I’m really proud of the [City] Council and the community for supporting this because this is going to be a legacy for New Braunfels,” Dicke told members of the New Braunfels Downtown Association on Tuesday.

The signature feature of the rec center is a water slide that loops outside one corner of the building and leads to a leisure pool with three lap lanes, a resistance channel and a children’s pool area with a spray feature.

Prior to opening, Das Rec will host a black ties and tennis shoes gala July 14 to provide membership scholarships for community members in need. Tickets are available at www.dasrec.com. Visit the website to see a full list of amenities and membership information.
SHARE THIS STORY