Recreation opportunities grow with the population of New Braunfels 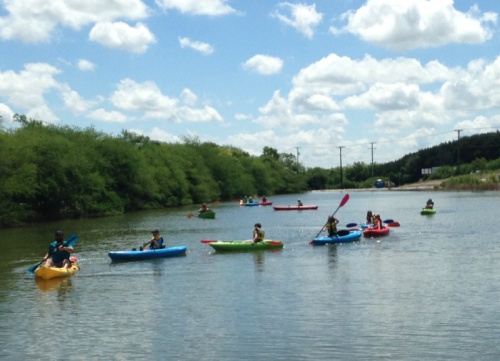 From parks activities to sports leagues, there are a broad range of recreational opportunities available in New Braunfels.

“New Braunfels is about family and quality of life, and that’s one thing that parks and recreation does is bring those things together,” said Kelsey Heiden, manager of the city’s new recreation center that is slated for a summer opening. Heiden served as marketing coordinator for the New Braunfels Parks and Recreation Department prior to being named recreation manager in November.

According to Heiden, the city offers a variety of programming that gives citizens an opportunity to get active.

“Our role is to get people introduced to different kinds of hobbies,” she said.

One way the city connects the community to a diverse range of activities is through its seasonal The Fun Things in Life guide. The monthly Outdoor Adventure Series at the Fischer Park Nature Education Center, for example, offers upcoming activities in fishing, kayaking and wilderness survival for children ages 9-12. Special activities, such as a family mini golf tournament, a moonlight paddleboat date night and a dog rodeo, will also take place this spring.

The city of New Braunfels’ new recreation center, Das Rec, is slated for completion in summer 2018, and Heiden said the functionality of the space will provide a broader spectrum of recreation opportunities to the community.

In addition to fitness equipment, the facility will include a 20,000-square-foot gym that can be divided into four spaces, making it “really versatile in what we can offer,” Heiden said.

A group exercise room will accommodate yoga, Pilates, high-intensity workout, barre and spin classes, and an on-site kitchen will be used for concession stand operations during games. The kitchen is also connected to meeting rooms the public can rent and will likely also be used for health and wellness programming. The center will also feature an elevated indoor walking track, and child care will be available during peak hours for children ages 6 months to 10 years, Heiden said.

“The best thing is it’s going to be priced right so everyone in the community can participate,” she said.

With a water slide that loops outside of the building as a signature feature, swimming will be a large component of Das Rec. Those who enter the facility will have immediate access to two swimming pools via the aquatics corridor that will feature family changing rooms. Additionally, the pool area is connected to birthday party spaces the community can rent.

The 25-yard, eight-lane competition pool will be used by the New Braunfels ISD swim teams. A leisure pool will feature three lap lanes, a resistance channel and a children’s pool area with a spray feature.

“As far as recreation, opportunities in this facility are endless,” Heiden said. “It’s all about togetherness, and that’s one thing this facility is going to bring: an opportunity for families to get active together.”

The city runs an adult softball league that accommodates 150-200 teams per year, as well as a sand volleyball league, Baker said.

Like other independent sports organizations, “You get to play with players from around the entire community,” Russell said. “It’s not just those that are within an attendance zone in a school, so you get exposure playing with a lot of different kids throughout the city.”

New Braunfels Hoop Masters is an organization that helps second- through ninth-graders hone their basketball skills by teaching participants the fundamentals of the game, offering seasonal camps and facilitating challenges at the Westside Community Center and McKenna Event Center.

“It’s been a really big blessing to just work with the community,” said Justin Castillo, founder of New Braunfels Hoop Masters. “The scene in New Braunfels has really taken us in, and we’ve been getting the trust of families for 10 plus years now.”

For the past four months, New Braunfels Hoop Masters has been building select teams that will begin competing in April. The organization also partnered with the RISE Basketball Program in San Antonio this year to create a New Braunfels division.

Castillo said his goal with the RISE program is to have a girls and boys team for every age division from third through ninth grades.

“We’re not only here to teach them basketball, we’re here to mentor them and teach them the ropes of life,” Castillo said. “We want to be those guys who motivate you and bring you up every time.”

According to city Park Development Manager Ylda Capriccioso, a $4 million all-abilities park called Callen’s Castle is on the radar for New Braunfels.

“(An all-abilities park) provides playground infrastructure and other playground or park activities that accommodate the needs of any child with a disability, whether its cognitive or physical,” Capriccioso said. “They have areas that are sensitive to sights and sounds, touch and feel, and there are more options than just playing on a slide or play structure.”

The city donated a 4-acre site for the park on FM1044 and Old Marion Road, and a master plan for the project was approved by the Parks and Recreation Advisory Board in 2015.

Fundraising efforts for Callen’s Castle are underway through the New Braunfels Parks and the Callen Hughs foundations, and a Bond Advisory Committee is meeting to discuss projects to consider for a possible May 2019 bond package. At the Jan. 17 BAC meeting, Callen’s Castle was presented to the committee as a possible project for consideration if a bond election takes place next year.

A bond package that passed in 2013 has been used to complete $36.4 million in parks projects so far with another $19 million in progress.

The construction of a sports complex was also identified for possible funding consideration at the Jan. 17 BAC meeting. The 2013 bond allocated $2.5 million to buy the land for a sports complex, and the acquisition of a $3.04 million piece of property at FM1044 and Klein Road is being eyed, with the New Braunfels Industrial Development Corporation, or 4B Board, aiming to fill the funding gap.

According to Mike Meek, president of the New Braunfels Chamber of Commerce, building the sports complex would cost around $25 million. Once complete, Meek said other sporting events could be moved to the new sports complex while some of the existing facilities receive the upgrades outlined in the city’s Athletic Field Master Plan.

“We’ve got the rec center coming this summer, so if we follow that up with outdoor sports, we’ll be in really good shape with that piece of the puzzle,” Meek said.