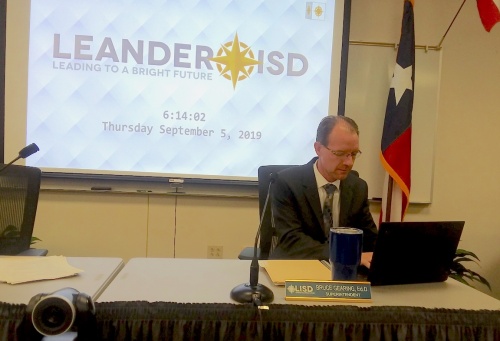 A committee formed to study and recommend drop-off times at schools to ease traffic has quickly found itself facing a host of other complex, yet related, issues, Leander ISD officials admitted at the Sept. 5 board of trustees meeting.

The Bell Schedule Committee was formed in October 2018 to try to alleviate traffic in and around schools during drop-off times. During his presentation, Smith said the Committee suggested extending elementary, middle and high school start times to a total window of 120 minutes, staggering them in 40-minute intervals.

“As our district grows [by] 1,000 students per year, traffic becomes more and more of a problem,” Smith said.

Smith said the Committee—comprised of six principals, six central office staff members, two trustees, one former trustee and one teacher—was also tasked with determining how instruction time could be added as a result of start-finish time changes.

“As we started peeling back, we found other things that needed to be considered,” said trustee Grace Barber-Jordan, who serves on the committee.

Smith, also a committee member, said academic achievement, school day length and even the amount of time between elementary school classes became part of the discussion.

“That’s what happens sometimes when you have that thoughtful dialogue with multiple stakeholders in the room,” Smith said.

A diverse Committee came up with some diverse solutions, according to trustee and committee member Pam Waggoner.

“Everyone had a solution, but no one agreed on what the best solution was,” she said.

Before providing final recommendations in December, the committee recommended seeking feedback on proposed start times to address questions and concerns, according to LISD documents.

However, trustees suggested to Smith that he and the Committee ought to come up with several options before soliciting feedback from stakeholders—primarily parents, students and LISD staff.

Trustees agreed to revisit the issue at a future meeting.

Earlier in the meeting, during citizen comments, Mavis Chase—a working mother of three children with one each in elementary, middle and high school—said she had read about the proposed 40-minute gaps between drop-off times.

She asked the board not to spread apart drop-off times so much, saying it would create problems with her employer. Placing drop-off times 40 minutes apart for each school, she said, is “too much for a working parent.”

“It is a challenge when you have kids at multiple schools,” Grace said.

At the start of the meeting, Cadet Col. Daniel Guerrero, a Leander High School senior and Air Force JROTC member, performed the National Anthem and Texas State Anthem while in uniform. Guerrero leads over 100 cadets enrolled in the program, according to trustee president Trace Bode.

Trustee Jim MacKay did not attend the meeting.