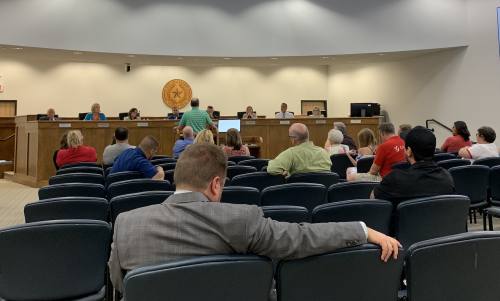 After more than an hour of discussion and hearing resident feedback, Leander City Council decided Oct. 3 to change how it conducts the public comments portion of city council meetings.

Council did not go forward with eliminating public comments about issues not listed on meeting agendas, as it was previously considering, but did restrict the amount of time it will dedicate to public comments during meetings.

Previously, the city allowed individuals three minutes each to address council on topics of their choosing at the start of city council meetings, if they filled out an information card beforehand detailing their name and address. Now, council will dedicate no more than 15 minutes total at the beginning of meetings to public comments. If more than five people sign up to speak, then the amount of time each person is allotted will decrease from the original three minutes.

People wishing to speak on items posted on a meeting agenda can elect to speak during the public comments portion at the beginning of the meeting or when the agenda item is called.

People wanting to speak during public comments will need to sign up to speak 15 minutes before the meeting starts. Council asked that an online signup option be made available.

A community interest segment will be added to meetings, during which people can share things they think will be of interest to the public, such as upcoming events. If people want to participate in that section, they will need to request to do so in advance.

The city is still figuring out how exactly it will execute these changes, city spokesperson Mike Neu said.

The changes come as part of an effort to make meetings run more efficiently, according to Mayor Pro Tem Chris Czernek. Earlier in September, council adopted council rules of procedure, which govern how council members conduct themselves during meetings.

At a previous meeting Sept. 19, council was considering eliminating public comments on non-agenda items altogether. Council voted to postpone the decision to Oct. 3 so residents would have more time to be informed of the possible change.

At the Oct. 3 meeting, several residents showed up to express concerns about the possibility of losing the opportunity to bring non-agenda-related topics forward at council meetings.

Leander resident Joel Bercu was one of nine people to address council at the meeting concerned about this possible change. Bercu said limiting public comments would lead to distrust in the community.

“While you think that this makes your meetings more efficient,” Bercu told council, “it will disconnect you from the people you come here to serve.”

Another resident Carl Norman said he does not think people speaking publicly during meetings is what is making meetings inefficient.

“You as public officials shouldn’t restrict free speech because you lack the skills and acumen to properly plan, coordinate, administrate an agenda and conduct a meeting,” Norman said to council. “It’s been obvious that the poor coordination, lack or parliamentary procedure and basic administrative process are the reasons for your record-long meetings, not the fact that citizens want to address their elected representatives in public.”

After hearing citizen feedback, council turned to discussion. Czernek said he feels it is important to have a portion of meetings open to citizen comments on items not on the agenda. He suggested the city limit the amount of time dedicated to public comments, similar to how the Williamson County Commissioner’s Court handles its public comments.

“Our intent is to run a business meeting, but to do it the right way,” Czernek said.

Council Member Marci Cannon said she does not have an issue with citizen comments if they have to do with items council has control over.

“If it’s not an item on agenda but it’s something the city council has control over, then great, fine, I don’t mind hearing it,” Cannon said. “The flip side of that is some call out on Facebook to rally everyone together to come here for some social item that we have no control over keeps our staff here again past midnight and it keeps us from focusing on the business at hand.”

Pantalion-Parker and Stephenson said they did not want to limit public comments.

“I really love it when the public can come and speak to us,” Stephenson said. “I think that’s what our country is about. ...We are the closest form of government to the people here, and they deserve this chance to be able to come to us face to face and tell us what is bothering them.”

Leander's next city council meeting is Oct. 17. The city plans to provide more clarifications about the changes coming to public comments and to notify residents of the new procedures, Neu said.