Room rentals are out, background checks are in for Leander Public Library 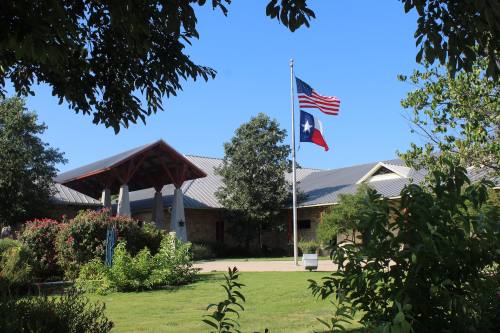 Leander Public Library meeting rooms will no longer be available for private rental, and background checks will be required for library presenters involved with programming geared toward children 17 and younger.

Leander City Council voted 5-2 Aug. 15 to limit the use of library meeting rooms to city-use only, with council members Kathryn Pantalion-Parker and Christine Sederquist opposed. Previously, Leander Public Library had two meeting rooms available for the public to rent for a fee. Now, their use will be limited to programs and events sponsored by the library, city government or the parks and recreation department, according to city documents.

“We have one issue that occurred in a magnificent city, our little city of Leander, one issue happened, and now it’s punishing everyone who does play nice in the sandbox, follows the rules and behaves themselves,” Pantalion-Parker said.

The changes come after a more than 2-month long city review of library policies and procedures. The city began the review in May after finding a drag queen story hour event was scheduled to take place at the library. The city canceled the event, prompting Open Cathedral Church in Leander to rent a space at the library to host a similar gathering.

The June 15 event—dubbed the Leander Family Pride Festival and Story Time—attracted hundreds of protestors and supporters. The city estimates it cost around $20,000 to ensure security for the day.

Council Member Jason Shaw said he thinks the halt to room rentals was needed to avoid future issues like this one.

“I hate taking this away from people … but I feel the only way to protect the city at this point is to stop the rentals,” Shaw said. “There are people that are trying to tear our city apart, and they’re going to keep trying.”

Mayor Troy Hill said he does not think it makes economic sense for the city to keep the rooms open for rental.

In the last year, local groups have used the library rooms to host events and conduct meetings. Such groups include local homeowners associations, Eagle Scouts, the San Gabriel chapter of the Daughters of the American Revolution, Pathway Bible Church and more, according to city documents.

Council Member Christine Sederquist said she thinks the rooms should remain available to rent since there is a lack of meeting space in the community.

“We don’t have a rec center, we don’t have enough meeting space, and I think it’s a shame to take it away from the public for no discernible reason,” Sederquist said.

Council Member Marci Cannon said the city faces space constraints for its programming and could use the extra space freed up from removing rentals.

“The library is called the library,” Cannon said. “It’s not the library activity center or the library rec center. It was built to serve the city of Leander as a library. … We need to be using it for its intended purpose.”

Parks and Recreation Director Mark Tummons said the library did not previously have a programming policy.

Council Member Michelle Stephenson said she thinks background checks are a good thing, and she has to undergo them when volunteering at her child’s school.

“I think having policies set down in writing is a good thing,” Stephenson said. “It gives you something concrete.”

Sederquist, who voted against the change, made a motion to implement the background checks but not a whole new policy. The motion did not pass.

“We’re always talking about how we have too many policies and we need to reduce the bureaucracy,” Sederquist said. “Let’s just let them have what they had before.”

Prior to making decisions on library policies, City Council went into executive session during the Aug. 15 meeting to discuss the proposed policies. Barbara Boulware-Wells, an attorney for the city, said the council did so to receive legal advice.

A few individuals shared their thoughts on recent library events with the council during the Aug. 15 meeting, which ended around 12:30 a.m. Friday morning.

Mary Elizabeth Castle, a policy advisor for the advocacy group Texas Values, spoke during this portion of the meeting. Castle said she thinks the city made the right choice canceling the Drag Queen Story Hour event, as she does not believe it is appropriate for children.

“Texas Values appreciates that there will be thorough background checks in the new policies for outside presenters,” Castle said. “I reiterate you’re doing the right thing in setting these policies and stopping these events.”

Leander resident Dan Rucker said during the comments portion of the meeting that he worries about how recent library-related events will affect the city. The city canceled another event featuring author Lilah Sturges, who is transgender, in July, raising concerns about discrimination. The National Coalition Against Censorship wrote an article about the cancellation, and author Neil Gaiman commented on the situation on Twitter.

After the meeting, Janet Harvey, a Georgetown resident who said she is a friend of Sturges', told Community Impact Newspaper she worries the actions decided on in Leander could have repercussions in other cities. Harvey said she thinks the council gave protestors what they wanted by cutting off room rentals.

“They’re shooting themselves in the foot by caving to the pressure,” Harvey said. “I think it’s ultimately bad for Leander, and I think it’s going to have a reverberating effect for everyone in the area.”