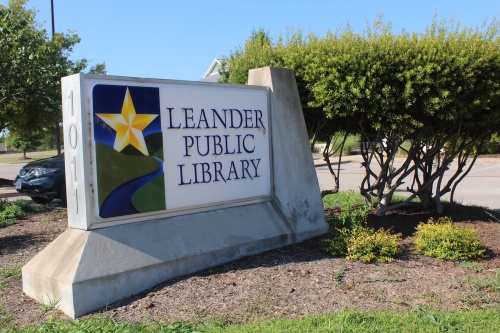 Leander City Council is slated to consider action on new library policies Aug. 15. If approved, the policy changes could affect library meeting room access and require some outside presenters to undergo background checks.

The city of Leander has been in the process of updating its library policies after events that drew national attention. The city canceled a Drag Queen Story Hour event at Leander Public Library in May, sparking conversations about how public spaces should be used.

Libraries provide access to resources, but they also serve as community centers, according to Laurie Mahaffey, executive director of Central Texas Library System, a nonprofit that provides consulting services to libraries.

“It’s a place of education and inspiration,” Mahaffey said. “People go to book clubs. They bring their kids to storytime.”

Leander Public Library staff schedules its children and adult programming—but they are not city employees. The city contracts with Library Systems & Services, a third-party company that has staffed the library since it opened in 2006.

In May, the city became aware of the Drag Queen Story Hour event and canceled it. City spokesperson Mike Neu said the city found that similar events at other libraries had involved individuals that were registered sex offenders, prompting the city to examine its policies.

“We immediately looked at what our screening process was and confirmed that we had no screening process,” Neu said. “It prompted us to take a harder look at a lot of what the library is doing.”

At the same time, the city canceled another event featuring outside performers, Summer Superhero Saturday, and put on hold scheduling events that brought in outside presenters while it examines its policies.

Room rentals are also being examined. The library has two rooms available for rent. Since June 1, the library has not accepted any new applications requesting to rent meeting space as the city reviews its policies.

During the Aug. 15 meeting, City Council is expected to discuss whether library meeting rooms should be available to the public for private rental or limited to city use only.

After the Drag Queen Story Hour was canceled, Open Cathedral Church in Leander rented out space in the library with plans to host its own drag queen storytime, which was later rebranded as the Leander Family Pride Festival and Story Time. While the event itself was limited to ticket holders, hundreds of protesters and supporters gathered outside the library during the June 15 event. The city estimates the event cost the city $20,255.90 to ensure public safety.

A proposed room rental policy stated that if an event “becomes a source of contention or divisiveness to the extent that it becomes a safety hazard” the event may be canceled or require “the event organizers to undertake, coordinate, and pay for all special precautions, including security, police or other emergency services.”

Deborah Caldwell-Stone, interim director for the ALA’s Office for Intellectual Freedom, wrote a letter to the Leander City Council stating the policy may raise the risk that the library be sued on First Amendment grounds.

In an interview with Community Impact Newspaper, Caldwell-Stone said a Leander Public Library staffer had requested she look at the policy.

“Court decisions have established that a government agency that is offering meeting spaces or public spaces for public use can’t discriminate on the basis of the contents of somebody’s speech, their viewpoint, their background or the group they identify with,” Caldwell-Stone said.

“If [groups] are told every time they meet they have to come up with thousands to make sure we have enough security in case people want to protest them, that’s ridiculous—we’re shutting them down,” Sederquist said.

“After some additional staff discussion and consideration, we decided to not include it,” Neu said.

Council will consider having room renters with anticipated attendance of 100 or more people to provide the library with a Certificate of Liability Insurance showing “general liability coverage in the amount of $500,000,” according to one proposed policy

The protocol is similar to city park policies regarding special events permitted in the city’s open space parks, according to Neu. Neu said in an email the goals of this proposed policy are to make library policies consistent with other city policies and to ensure the community continues to see the library as a safe and welcoming gathering space.

If council decides to no longer allow room rentals, the spaces would be restricted to city use. The library currently faces space constraints, according to a presentation given during the July meeting. Neu said the library could use added space for additional programming, considering the city has grown rapidly since the library first opened.

Mayor Troy Hill said he thinks the library should stay out of divisive social issues, and the library’s primary role is not to provide rooms for rent.

“It’s role is to provide a source of learning and a safe environment,” Hill said.

Rob Lederman, pastor of Pathway Bible Church in Leander, said finding affordable meeting space to rent in Leander is a challenge. The church began renting space at the library in June. Lederman said when he went to rent space for July, he was told the rooms were unavailable while the city reviews its policies.

In the meantime, Lederman and his church are renting out The Mason Homestead, a city-owned property next to the library that Lederman said the city is allowing the group to use at a lower price than the standard rate.

“I can probably stay with the Mason house a little longer but assume rates would go back to normal, which would be cost-prohibitive,” Lederman said.

City Council is also expected to decide Aug. 15 whether or not outside presenters at the library must undergo background checks. A proposed policy states that presenters for programs involving children younger than 18 would need to undergo a city background check or the equivalent, “meaning a comparable background check from another source.”

Neu said one goal of this proposal is to make library policies consistent with other city policies, such as those of its parks and recreation department, which background checks its participants such as coaches and umpires in its athletic programs. Another goal is to ensure the safety of patrons and programming participants, Neu said.

Mahaffey said background checks are not typical at libraries.

“Most libraries work with very limited budgets, and it has not been a problem in the past,” Mahaffey said. “The likelihood of a presenter ever being alone with a child is extremely low.”

“You have to apply it consistently to everyone so that you’re not engaging in discrimination,” Caldwell-Stone said.

The cancellation of another event in Leander in July led to concerns about discrimination. Leander Public Library was scheduled to have author Lilah Sturges speak about writing comics and her book “Lumberjanes: The Infernal Compass” with a youth graphic novel club. The day she was supposed to appear, Sturges received an email stating the event had been canceled.

“When I asked what happened, they gave me a couple of reasons,” Sturges said. “One of them was that I had not done a background check, which I had not been asked for.”

Neu said the event was canceled because it involved an outside guest.

“Having an outside guest met that criteria that prompted us to cancel the Superhero Saturday and the Drag Queen Story Time,” Neu said. “Once we became aware that the event was still happening, we immediately assessed whether or not it should fall under our review and identified that it did and canceled it.”

Sturges, who is transgender, said she was confused why other events were still allowed to continue at the library and felt discriminated against.

Neu said some events with outside guests have been allowed to continue, such as REPCO Wildlife events, because the library has a history with these groups.

Dan Rucker, a Leander resident, said he and his daughter, who is a fan of Sturges’ work, arrived at the library the day of the event, upon which they were told the event had been canceled. Rucker said he feels there has been a clear pattern of discrimination.

“This happens to be a trans writer being discriminated against at the very same place where we’ve seen difficulty in trying to share LGBT-related event series,” Rucker said. “I don’t think background checks are a bad thing—it was just kind of pulled out of a hat.”

The number of programs at Leander Public Library increased by about 40% from fiscal year 2013-14 to FY 2017-18, when 903 programs were offered, according to annual reports submitted to the Texas State Library and Archives and Commission.

Neu said the library staff has done a great job over the years putting together events, and the city is committed to diversity.

“We welcome those from different backgrounds, including the LGBTQ community,” Neu said.

Rucker, who has been a presenter at the library in the past, said he worries about how recent events may affect future programming.

“People in the national comics community are looking at this as a place they don’t want to come,” Rucker said. “That definitely hurts my goal of seeing kids have safe, realistic, progressive, empathetic interactions with the world around them.”

At the end of the day, libraries serve as engines of democracy, Caldwell-Stone said, and they are for everyone.

“Sometimes there will be a book on the shelf or a program that takes place that doesn’t match your beliefs or values, but the library will also be sponsoring events that match your beliefs and values,” Caldwell-Stone said. “The library ... doesn’t advance any one particular view. It just supports the information needs of everyone in the community.”

A version of this story will appear in the Aug. 20 print edition of Community Impact Newspaper.
SHARE THIS STORY