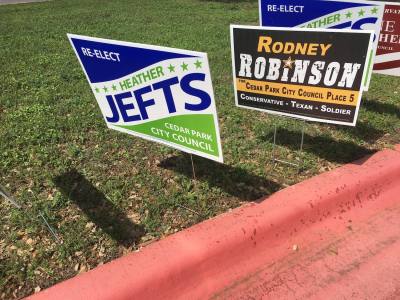 The recount for Place 5 on Cedar Park City Council resulted in no change in election results, according to Sue Langley, data coordinator for Williamson County.

Rodney T. Robinson won the election by two votes and will be sworn in at the next City Council meeting May 23.

The recount will take place May 21 at 9 a.m. and may continue May 22 if necessary. Both Place 5 candidates have a chance to select one member to serve on the Recount Committee as a vote counter that will tally votes as ballots are read, according to city documents.

LeAnn Quinn, recount supervisor/coordinator and Cedar Park city secretary, is also asking the Democratic and Republican Parties of Williamson County for their designation of one member each to serve as vote counters on the committee as well, according to city documents.

Jefts was behind her opponent Rodney T. Robinson by two votes, after a count of provisional and mail-in ballots took place May 10. Prior to that, on election night May 4, Jefts had been ahead by one vote.

“The vote count was incredibly close,” Jefts said. “A full recount gives everyone that peace of mind that every vote was counted, that every intent was honored in the process.”

Votes for Places 1, 3 and 5 on Cedar Park City Council were canvassed—or made final—at a special-called meeting May 13, during which it was announced that the city has received a request for a recount of Place 5 election results.

Mayor Corbin Van Arsdale has designated Cedar Park City Secretary LeAnn Quinn as recount coordinator and recount supervisor, according to city documents. Quinn said she has 48 hours to review the request. If the request is approved, a recount process will ensue.

Robinson said he feels confident in the recount system and he will accept the results however they turn out.

“I think it is the right thing to do,” Robinson said. “I’m glad [Jefts] made the decision. It will provide reassurance to her voters and my voters, reassurance of the final outcome of the election. So I think it’s a good thing.”

New City Council members will be sworn in during their May 23 meeting, according to a press release from the city. Tim Kelly beat incumbent Stephen Thomas in the Place 1 election. Incumbent Anne Duffy is keeping her spot on Place 3.
SHARE THIS STORY