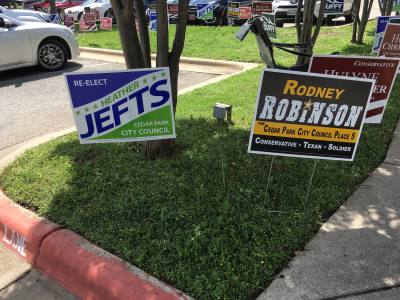 After the count of provisional and late mail ballots May 10, Cedar Park City Council candidate Rodney T. Robinson has won the Place 5 seat with 50.02% of the vote.

Incumbent Heather Jefts, who led by only one vote on election night, ultimately lost by two votes. All votes are unofficial until canvassed.

Incumbent Heather Jefts received just one more vote than her opponent Rodney T. Robinson in the election for Place 5 on Cedar Park City Council, according to final unofficial election night results from Williamson County. The result of the race could change following the count of mail-in and provisional ballots.

Chris Davis, the elections administrator for Williamson County, said in an email that mail-in and provisional ballots will be reviewed and counted during a late/provisional ballot board at 4 p.m. on Friday, May 10.

“I’m excited to have been re-elected,” Jefts said. “I know we still have some potential votes to count, and I’m looking forward to having the official votes.”

A recount has not yet been requested, according to Davis, though he said that could change after Friday.

Jefts, who was originally elected to Place 5 in May 2017, said that if she remains on City Council, she will continue being accessible to her constituents.

“I’m planning on continuing the same way that I served in my first term: being available to everyone with office hours weekly [and] posting all meetings and agendas in public forums online to make sure everyone is aware of what’s going on in the city,” Jefts said. “I plan on being open and available to absolutely everyone.”

Robinson said the results were closer than he anticipated.

"Things could possibly change," Robinson said. "I’m just basically leaving it in the hands of God at this point and just continuing to pray and let God be the deciding factor in who wins the election."

Election results will remain unofficial until canvassed. Canvassing will take place at a special-called meeting at a date no later than May 15, according to a May 4 press release from the city of Cedar Park. Council members will be sworn in at the May 23 City Council meeting, according to the release.

Editor's note: This story was updated May 8 at 2:48 p.m. to include a response from Robinson.
SHARE THIS STORY