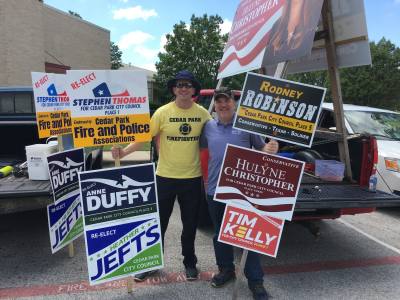 Tim Kelly has ousted longtime incumbent Stephen Thomas in the race for Place 1 on Cedar Park City Council, according to unofficial Williamson County election results for all 21 precincts. Kelly garnered 52.76% of votes.

In the Place 3 race, incumbent Anne Duffy pulled ahead of her opponent Hulyne Christopher, garnering 51.48% of votes.

The race for Place 5 was as close as it could be. Though Rodney T. Robinson was ahead based on early voting results, by the end of the night and with all precincts reporting, incumbent Heather Jefts had one more vote than Robinson.

Duffy said her vision is to keep moving the city forward.

"We have some excellent projects, and an excellent staff," Duffy said. "We cannot be divisive in our city. We have to represent everyone and consider everyone's views.”

All results are unofficial until canvassed, a process to certify votes must take place within 11 days of this election, according to the Texas Secretary of State’s office.

Tim Kelly, Anne Duffy and Rodney T. Robinson are currently in the lead in the election for Cedar Park City Council Places 1, 3 and 5 respectively, according to unofficial early voting results from Williamson County.

Tim Kelly received 53.18% of the vote in the Place 1 election against incumbent Stephen Thomas.

Incumbent Anne Duffy received 51.09% of the vote in the Place 3 election against Hulyne Christopher.

Rodney T. Robinson received 50.71% of the vote in the Place 5 election against incumbent Heather Jefts.

All results are unofficial until canvassed, a process to certify votes must take place within 11 days of this election, according to the Texas Secretary of State’s office.
SHARE THIS STORY