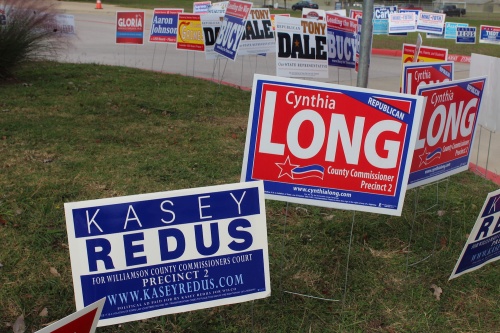 Votes from one iVotronic voting machine from one day of early voting and provisional ballots are not yet counted, according to the county.

With 52 out of 59 polling locations in Williamson County reporting, incumbent Cynthia Long has earned 52.51 percent of votes in the race for Williamson County Commissioner, Precinct 2, according to unofficial results from the county.

"I am [...] thankful and appreciative of the confidence they've put in me to continue to serve them and serve Williamson County," Long said.

Cynthia Long is in the lead for Williamson County Commissioner, Precinct 2. Unofficial early voting results show Long received 20,816 votes, and Kasey Redus received 19,813 votes, according to Williamson County election results. Redus is behind Long by 2.46% of the vote.

Long, the Republican incumbent, has served as county commissioner since 2006. Redus, Long’s Democratic opponent, is the owner of Primrose School at Vista Ridge. More information on Long and Redus can be found in this Q&A with the candidates.

This story will be updated as Election Day votes are released. All results are unofficial until canvassed.