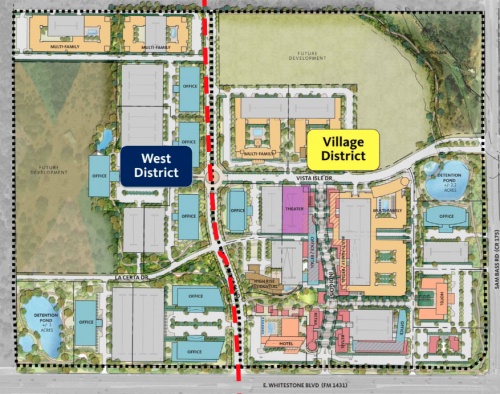 Indigo Ridge North could bring retail, office and restaurants to the eastern side of the Cedar Park.

Cedar Park City Council approved a rezoning for a mixed-use development in eastern Cedar Park that could bring retail, office and restaurants to the city at its Thursday night meeting.

The roughly 126-acre property at the northwest corner of East Whitestone Boulevard and Sam Bass Road was previously zoned as a planned development. City Council rezoned the property to planned development with a base district of mixed-use and approved another request to change the property’s future land use plan designation from regional, office, retail and commercial to a planning area.

The mixed-use project, known as Indigo Ridge North, is planned to include retail, hotel, office and residential components. Amy Link, the assistant director of development services with the city, said only office buildings can reach up to 10 stories high and there would be a maximum of 3,000 residential units, although she said the developer could request to build more units in the future through a special-use permit.

The Village District is designed to include shopping, dining, office, residential and hotel components, while the West District would focus on office and employment uses, Link said.

City Council adopted the future land use map change and rezoning with recommendations from the Planning & Zoning Commission, which included conditions on changing daycare and laundromats from permitted use to special use.
SHARE THIS STORY