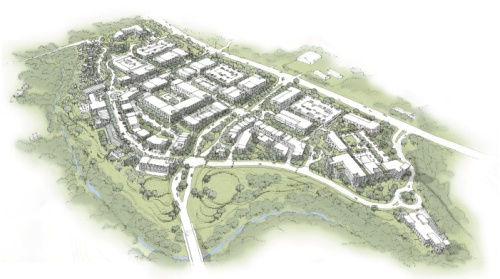 An rendering of an aerial view of the proposed multi-use development called The Village at Spanish Oaks.

The Village at Spanish Oaks, an 80-acre multi-use development proposed last month to Bee Cave officials, has moved a little farther along in the path to full approval.

The City of Bee Cave Planning and Zoning Commission held a public hearing Tuesday on the newly-proposed multi-use development, and following discussion from the developers, city staff and city residents, the commission approved the zone change with an amendment to restrict weekend construction on the development until after 8 a.m.

City Manager Clint Garza confirmed the preliminary approval from the commission regarding the zoning change from mixed-use and agricultural to planned development-mixed use only, meaning the development has moved up the ladder in the lengthy climb to final approval.

“The proposed amendment will now be brought up to City Council and they will decide whether they want to follow P&Z’s request or not,” Garza said.

Director of Planning & Development Lindsey Oskoui confirmed that City Council will consider the commission's recommendations on Oct. 9, and is scheduled to vote on the PPD ordinance Oct. 23.

If City Council approves the zoning request, the next step is consideration of platting and site planning, Garza said.

Several Bee Cave residents addressed the P&Z Commission during the public hearing Tuesday night, most of whom live at the nearby neighborhood called The Homestead.

Concerns centered around traffic, specifically during the timeframe The Village is built—a window developers and city staff estimate to be about 5 years. Great Divide Drive, a transit capillary running north and south along the western portion of the proposed development, was the focal point of those traffic concerns.

Kathryn “Casey" Bolinger of Greenbrier Southwest, one of the two developers proposing The Village to Bee Cave officials, said that the PDD ordinance prohibits construction traffic on Great Divide Drive except when necessary to develop the one parcel west of Great Divide and for construction of the intersection of Silvertree Drive with Great Divide.

“In addition, the internal roadways within the Village at Spanish Oaks are all designed to accommodate large vehicles, including 18-wheelers, so they will easily accommodate a vehicle with a trailer as well,” Bolinger said.

She added that the developer is contributing over $1 million to traffic improvements in the area, but ultimately the Texas Department of Transportation controls how and when those improvements occur.

Other resident concerns brought up during public comment included infrastructure, construction noise, resident density, emergency vehicle access to the area and glazing—a term referring to the glass component of a building’s façade.

City documents state the planned development district as proposed would include a mix of single-family townhomes, lofts over retail shops and apartment-style multifamily residences. Also included in the development are spaces dedicated for senior living units, offices, restaurants, a hotel/spa and recreation space.


The Village at Spanish Oaks by the numbers:

500-800: Depending on market demand and product mix, the number of residential units expected to be built
75,000: Estimated square feet of restaurant and retail space concentrated in the development’s Main Street District
80: Number of rooms within the planned Inn and Spa at Spanish Oaks
400,000-500,000: The number of square feet of Class A office space
$1 million: Estimated cost within the proposal to be contributed to Bee Cave traffic mitigation measures as pertinent roadways are developed
SHARE THIS STORY