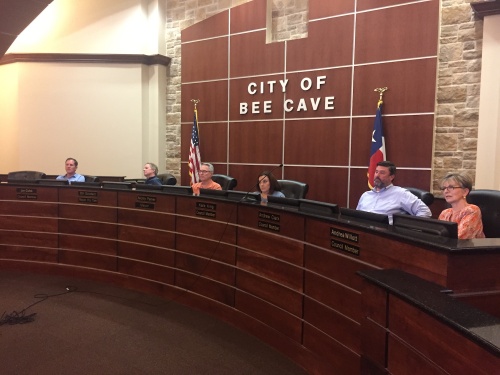 Bee Cave City Council voted Oct. 22 to issue a request for proposals for an engineering firm with regard to making improvements on the low-water crossing the city recently annexed.

The low-water crossing on Great Divide Drive south of Hwy. 71 in Bee Cave has been a source of controversy among local taxpayers for years. Many who drive on it regularly agree it needs to be improved with regard to flooding issues, but compromise on the best option has remained fleeting.

Now, due to an ongoing interlocal agreement between the city of Bee Cave and Travis County, a plan is taking hold centered on how best to improve the low-water crossing.

According to the agreement, the city of Bee Cave has 90 days from Sept. 10 to retain an engineering firm to provide recommendations to the city regarding possible alternative improvements for Great Divide.

During the Oct. 22 regular meeting, city staff sought direction from council on how to proceed, either through retaining an engineering firm previously used by the city or to provide feedback on a request for proposals that staff would publish, review and bring back for an award Dec. 10.

Council voted unanimously to issue a request for proposals from engineering firms and added an item in the motion that provides possible solutions to a pedestrian crossing separate from a bridge meant for vehicles.

Documents provided by the city of Bee Cave state there are numerous problems created by the low-water crossing, including the fact that it is the only source of ingress and egress "for a 200+ residential lot neighborhood," which is a reference to the Homestead community located near the crossing.

Several people spoke during public comment on the agenda item. Some concerns centered on project costs and construction impacts to the area as well as the potential value of retaining services and information from engineering firm Miller Gray, with which the city had previously worked regarding the crossing. But concerns also centered on urging officials to pursue a timely completion to the project.

"I think I have low-water crossing PTSD at this point," said Homestead resident Victoria Winburne, who also referenced dangers not just to residents but first responders who deal with flooding at the crossing. "I'm hoping that whatever we do ... we can do something that makes it safer not just for the Homestead, but also for the people that save our lives."

Among many other requirements, city documents state whichever firm ends up with a contract from Bee Cave must provide hydrologic and hydraulic models for the crossing that would be based on the most current data available.

The chosen firm must also determine temporary access routes for the Homestead residents while construction of low-water crossing improvements are underway, provide a complete cost estimate, and present and discuss recommendations and results at City Council meetings.

The city has also provided a timeline mandating an award of contract to a chosen firm by Dec. 10, a finalized contract by Dec. 16 and project kickoff meeting by Dec. 18. There is not yet a deadline for the final report on improvements for the crossing.

"If we advertise and do everything on the schedule, and the schedule is aggressive, we can take action on the 91st day," City Manager Clint Garza said.

Since the city opted to submit a request for proposals, Oct. 28 will be the deadline for issuance of the request, and proposals will be due by 2 p.m. Dec. 2.

Garza said he expected at least six firms to respond to the request for proposals.

"It has the potential to be a large enough project that it should get plenty of responses," Garza said.