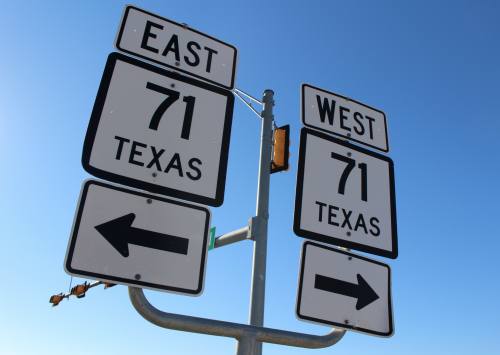 Signs point the way for motorists at the intersection of TX Hwy. 71 and Bee Creek Road.

The Spillman family, descendants of Hill Country pioneers and namesakes of Spillman Ranch, put under contract in late 2017, 20 acres of land located at 14310 West Hwy. 71 in the city of Bee Cave, realtor Jerry Stein said. As part of the sale, the family will retain four acres, reserving them for future commercial development, he said.


Stein, who is with Buyers Incentive Real Estate in Lakeway, said those four acres are zoned community services and have 800 feet of Hwy. 71 frontage. There is already interest from a buyer for two of the four acres, Stein said.

The pending Spillman land sale is an example of how investors value properties along the West Hwy. 71 corridor from Spicewood to Bee Cave as an attractive opportunity, real estate experts said. (Click on this link to see an interactive google map of the properties mentioned in this article).

“More [commercial properties] are coming up on the market and more things are selling, you can just see it,” realtor Janie Quisenberry with Bee Creek Real Estate said. “I’ve got three or four people now who have me looking for [needs-appropriate] property along Hwy. 71 but I just can’t find it for them.”

Near Spicewood, real estate broker Joe Connors with McAllister & Associates is completing leasing the second of two phases of 71 Warehouse, a newer office complex west of Bee Creek Road and home to businesses such as Charity Auto Sales, pet boarder Camp Bow Wow, as well as a child’s day care, a fitness center, a coffee roaster, home building trades and an auto repair shop that caters to local residents.

“I’m looking ahead to serving people in the planned Thomas Ranch development [slated to have 3,300 homes on 2,200 acres] in the next few years," Connors said, pointing out he is moving forward with building a second, three-building office warehouse on Hwy. 71 at Gregg Drive. An existing building on the property is now leased to Lifted Trucks of Texas, Community Impact Newspaper reported in December.

Accountant Mindy Smith, CPA leases part of an office in a small, one-story professional building on Hwy. 71 west of Bee Creek Road that also houses a law firm, a dentist, a home builder and a windows & doors provider.

“We really need retail space out here. There are not a lot of choices and my client base is starting to really saturate between [the communities of] West Cypress [Hills] and Briarcliff,” Smith said.

Quisenberry agreed saying since families are moving to the Hill Country along what is described as the last quarter of underdeveloped land outside Austin, retail and office space demand will rise. Quisenberry said the most affordable commercial tract she has seen is listed at $1.2 million for a few acres with highway frontage near Bee Cave.

That’s an old story for land developer representatives like Bill Meyer, senior vice president, regional manager at Newland Communities. Newland and its partner homebuilders are about a third of the way through constructing Sweetwater West, a master planned community that will have 1,550 homes when completed.

With about 680 home sites sold as of December, Meyer said site work on 14 acres of highway frontage will be finalized in mid-to late January to support retail and services. Newland’s parcel across the road from Bee Creek Parkway is being subdivided into six commercial lots, he said, not revealing committed tenants at this time, citing client confidentiality.

Another three acres or so is to be available for future retail at the northwestern end of the loop of Pedernales Summit Parkway farther up Hwy. 71, Meyer said.

On the northwest side of the intersection with Serene Hills and Hwy. 71, H-E-B owns the 21-acre parcel, property records showed. An H-E-B public affairs representative said in December H-E-B has no plan or timeline to develop the parcel.

Crossing Hwy. 71, Serene Hills Drive is being extended as Sweetwater Crossing, into Sweetwater East, a 400-acre, master-planned community  in Bee Cave’s extraterritorial jurisdiction but governed by a separate development agreement.

Published literature dated 2017 from developer Wheelock Street Capital of Greenwich, Connecticut showed a dozen available commercial parcels in sizes from one to 23 acres. All are being set aside for future retail, office or multi-use development. Several of the owned parcels have frontage along Hwy. 71 according to Travis County property records.

The Wheelock literature also shows a parcel on the eastern portion of Sweetwater East dedicated to the Covert Auto Group. The owner of the 32-acre tract is listed as Covert's representative Matthews-Barnes Brothers Investments LP.

Wheelock sold the parcel to the Covert group in July 2015, Community Impact Newspaper reported. The land, zoned commercial and is adjacent to the Lake Travis ISD property where the district’s bus barn is now, and is also the location of future Middle School Number 3 by Sept. 2019, school district leaders said.

Closer to town, at a recently-installed stoplight at Vail Divide, Nitro Swimming has new neighbors. A Dallas couple is readying to reopen the Hill Country Golf & Guitar entertainment venue. The purchase deal is due to close around February, according to the real estate broker involved. The venue went into foreclosure in 2016.

In front of that property facing the highway, the new Bee Cave Shopping Center located at 15500 W. Hwy. 71 is readying to open in early 2018. Tenants are to include Serasana, a local yoga and massage therapy business, Domino's pizza, a nail salon and Luv Braces and Kids' Dentistry, according to Ryan Ridgeway with Stream Realty.

“I think [the emergence of retail and service-oriented businesses will] be good for the community because it’ll give a lot of these [homeowners] out here, they won’t have to go into town as much. And it’ll be more of a community [environment],” said Guy Oberg III, the real estate broker behind the sale of Hill Country Golf & Guitar.

“It seems like a lot of it is being leased pretty quickly,” he said. “I’m curious to see how long that’s going to take. We don’t know how big of an appetite [for new offices/services) just yet because it’s still hard to get the workers out to the locations.

“And it is expensive retail, some of it is [priced at] $30.-$40. per square foot. It’s similar [pricing] to in-town [Austin], along South Lamar Boulevard, and the Burnet Road area,” Oberg III said.

But commercial investors are gambling the market continues to stay robust. On one of three lots adjacent to Nitro, a tract called The Village at Vail Divide will be home to Acrotex Gymnastics, now temporarily housed at a property on Bee Creek Road, according to Ken Satterlee, founder of St. Croix Capital Corporation of Austin. The Vail Divide lots still have to undergo site development before future tenants can build vertically, likely sometime in 2019, he said.

On the south side of Hwy. 71 near Vail Divide, 11 commercial plats are being advertised on about 23 acres out front of the Bella Colinas subdivision. Prospective businesses include Kiddie Academy, a day care franchise which already has operations in Pflugerville, Round Rock and Cedar Park. One retail plaza is already rising by the highway and just inside the neighborhood, a new office of Austin Regional Clinic was nearing completion in late December with a mid-January grand opening planned.

Approaching the stop light at RM 620, a medical plaza on the northwest corner Hwy. 71 is weeks away from accepting tenants such as Alive & Well and Elle’s Café & Coffee, Eric Perardi, owner of Perardi Development said. Second level tenants to be moving in by the end of March include: Lone Star Podiatry; Legacy Bone and Joint Orthopedics; Austin Gastroenterology, and Sanova Dermatology.

He said other plats on that corner called the Park at Bee Cave behind Bee Caves Baptist church are in development and included a new concept Schlotzsky's, a restaurant, a 40,000 square foot surgical center as well as a salon, other retail and proposed day care. Sites were already being prepared in late December.

Editor’s note: Development and real estate broker-related information gathered for this article does not represent a comprehensive view of available land or land proposals along W. Hwy. 71. Look for an updated version to this post in Community Impact’s first 2018 print edition, due in mailboxes mid-January.