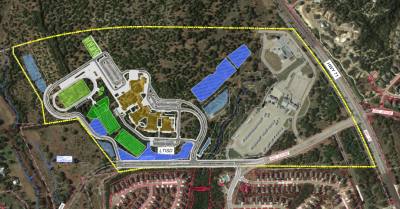 This image shows the layout of proposed Middle School No. 3 in Bee Cave's extraterritorial jurisdiction.

Bee Cave City Council Dec. 12 approved a site plan for what is set to be the third middle school in the Lake Travis Independent School District, located at 5400 Vail Divide and 16101 Hwy. 71 W. in Bee Cave’s extraterritorial jurisdiction.

Travis County voters approved funding as part of the Nov. 2017 bond election and district staff are hoping to begin construction this month, according to Superintendent Brad Lancaster, who told council members he hopes students can move in for the 2019-20 school year, a year sooner than the district planned.

The 225,000-square-foot, two-story facility—along with playgrounds, a football field and tennis courts—is being designed to accommodate 1,200 students with possible future conversion to a high school. Middle School 3 is planned for 67 acres on an existing 136-acre parcel where the district’s bus barn and technology building are located, records showed.

While council agreed to several zoning variances related to issues such as drainage, the only amendment changed a plan for a six-foot-wide sidewalk with no buffer from the Vail Divide roadway to a five-foot-wide walkway with a four-foot buffer to better protect pedestrians.

Even though the speed limit will be set at 30 m.p.h., council members agreed it would be wiser to have the relative protection once Vail Divide is extended through to Hamilton Pool road in the future.

In a separate agreement, Lancaster told Community Impact Newspaper the district is closing on a land purchase agreement on adjacent land that will be used for a future road extension for Vail Divide, property he said will likely be donated to the future road builder.

Bee Cave City Council approved a plan to issue a formal request for proposals to hire a consultant who will be tasked with finding a site for a new police/municipal court facility. Two possible sites are being considered, including expansion of the current police facility at 13333 Hwy. 71 and another city-owned parcel on Bee Cave Parkway known as the Skaggs property, Police Chief Gary Miller told council.

The study would provide a site analysis and approximate construction costs for each piece of land. Site analysis will include both developed and undeveloped options, city records showed.

The current facility housing the Be Cave Police Department was built in 1998. This 8,000-square-foot facility contains 19 sworn staff. The facility has no holding cell; prisoners are handcuffed to a bench. Proposals from the RFP are due in February, city documents showed.
SHARE THIS STORY