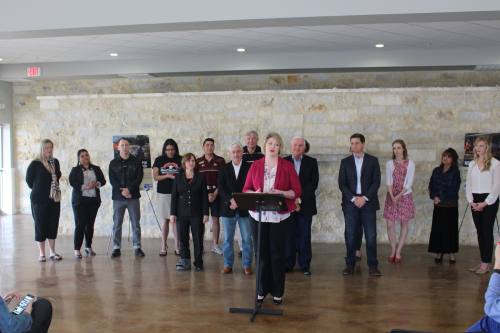 The Memorial Day weekend and All Saints Day floods are old news for many people, said Michelle Harper, president and CEO of United Way of Hays County. But that is not the case for those who have yet to move back into their flood-damaged homes, she said.

The UWHC is helping to support the ongoing flood recovery through fundraising, and the nonprofit presented three recovery organizations with checks totaling nearly $420,000 on Feb. 19.

“It’s my hope that by awarding these funds, United Way can bring attention to the continuing needs of our flood survivors,” Harper said. “We still have a ton of people who are in need and there is a lot of money that needs to be raised.”

UWHC presented the Blanco River Regional Recovery Team, or BR3T, with $25,000 to assist in ongoing recovery efforts. The BR3T is the federally designated disaster recovery organization for Blanco, Caldwell, Guadalupe and Hays counties. The organization is still seeking volunteers to help with recovery efforts and recently began seeking living space for out-of-town volunteers.

The San Marcos Housing Authority received a check for $70,000 that will help repair and rebuild 10 residences at the CM Allen Homes, a public-housing development, that were damaged during the floods.

May said he was encouraged by the collaboration he has seen between relief organizations. May asked that those who are able consider volunteering to help with the recovery efforts.

“This has become old news to everyone except those who need help the most,” he said. “The partnerships that we’ve worked out here with the United Way, the BR3T, the San Marcos Housing Authority are really unprecedented. Communities always find ways to work together, but I don’t think they find ways to work this well together.”

In the weeks following the flood, UWHC allocated $40,000 to organizations providing direct assistance to those affected by the floods.

In addition to the three organizations that received checks, Harper credited local volunteers with helping to raise funds in the days following the flood.

The relief efforts also got a boost from Central Texas brewing company Shiner Beer, which contributed $25,000. Junk Gypsy, a boutique clothing store, raised $45,000 for the efforts. Buda resident Lauren Flake designed a “Texas Strong” logo that has been printed on tank tops and shirts, which have raised almost $150,000.

According to a news release accompanying the announcement, the funds will help more than 50 families move back into their homes that were damaged or destroyed by the two floods in 2015.