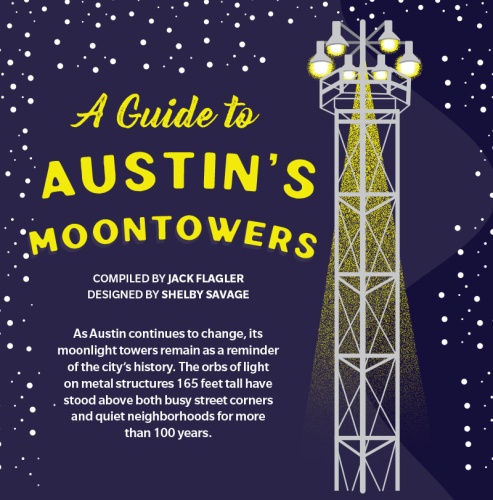 In the 1890s, Austin followed a national trend when it purchased electric light towers from the Fort Wayne Electric Company. According to Austin History Center archivist Rusty Heckaman, the city hoped to establish itself as a national leader in technology innovation. Over time, other cities eventually phased out the moontowers as newer technology was developed, leaving Austin as the only city in the world where moonlight towers remain.

Most of Austin’s moontowers began construction in 1895, Heckaman said, just after the city constructed a dam over the Colorado River. Col. Monroe Shipe saw an opportunity to showcase Hyde Park, the neighborhood he was developing in the late 19th century. According to the Hyde Park Neighborhood Association’s website, Shipe ran power to the moontower at 41st Street and Speedway from his own personal generator, thus lighting the city’s first tower in 1894.

KEEPING THE LIGHTS ON

Over the course of decades, some moontowers were lost, with reasons ranging from automobile accidents to a tornado, according to Heckaman. Seeing this, city and state leaders made an effort to preserve the remaining structures. In 1970, the remaining 17 towers became state historic landmarks and in 1976, they were added to the National Register of Historic Places. Today, local nonprofit Preservation Austin works with the city and the state in an advisory role to help maintain the moontowers, ensuring they live on as “stitches in the tapestry of Austin,” according to Preservation Austin board member Ken Johnson.


WHERE ARE THE LAST THREE?

While there are 17 moontowers protected as historic landmarks, Austinites will notice only 14 standing around the city. Three of the towers have been taken down to restore the parts, according to Michael Pittman, power system principal engineer at Austin Energy. Each of the towers will eventually be restored, although they cannot go back to their original locations because of area development. Pittman said work occurs on about three towers per year.
SHARE THIS STORY