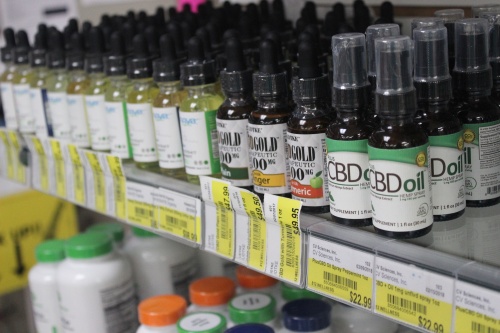 Peoples Pharmacy on North Lamar Blvd. offers customers a number of CBD products, which come in various forms such as tinctures and capsules.

Inside Wheatsville Co-Op’s store on Guadalupe Street in Austin, customers walking through the wellness aisle will see rows upon rows of cannabidiol, or CBD, products. Dozens of supplements in capsule or tincture form offer customers options to relieve stress, insomnia, anxiety, or minor aches and pains.

About a mile up the street, at Peoples Pharmacy on North Lamar Boulevard, a similar wall of CBD products lines the shelves, and customers pick off bottles of oil and softgels, some of which offer additives such as turmeric or ginger.

CBD stores have multiplied across Austin’s urban core—with at least eight specialty stores opening in Central Austin since 2018—despite the product existing in murky and convoluted legal territory until this spring. On June 10, Gov. Greg Abbott signed House Bill 1325, which made hemp products legal in Texas provided they contain less than 0.3% THC, the psychoactive chemical in marijuana.

Meanwhile, Texas doctors face strict limitations on prescribing medication containing CBD. Controlled clinical trials have proven the medicine to offer relief for patients with certain forms of epilepsy. Since 2015, a few dozen Texas neurologists have prescribed CBD to epileptic patients through the state’s Compassionate Use Program.

A separate piece of legislation Abbott signed on June 14 opens up use of CBD in the medical realm. HB 3703 makes CBD medication available to patients with conditions other than epilepsy, including autism, multiple sclerosis, terminal cancer or an incurable neurodegenerative disease.

Local doctors, retailers and legislative advocates said the two changes to state law will be beneficial to Texans. However, they stressed more needs to be done—especially in the area of clinical research—to make sure patients and consumers can take advantage of the benefits CBD has to offer.

CBD is a naturally occurring ingredient found in the cannabis plant. According to a 2017 report from the World Health Organization, it produces no psychoactive effects, such as the high THC creates in recreational drug users, and “exhibits no effects indicative of any abuse or dependence potential.”

The CBD now legally allowed for commercial sale in Austin is derived from hemp, while the medicinal CBD doctors prescribe to patients is derived from marijuana. The two plants both produce the same CBD compound, but they are not the same.

Hemp is an industrial crop. Before U.S. Congress passed the 2018 Farm Bill, it was legal to grow only in certain states. The Farm Bill made it federally legal for farmers to grow the crop, and Texas followed in step with the federal government by legalizing hemp production in HB 1325.

The marijuana-derived CBD is regulated and distributed according to the Texas Compassionate Use Program, which was created in 2015. The program limits the medicine’s scope, establishes regulation, and ensures patients receive exactly what doctors prescribe.

Dr. Karen Keough is a neurologist with Child Neurology Consultants of Austin and chief medical officer for Compassionate Cultivation, one of three companies in Texas licensed to produce medicinal CBD. She is one of only a few dozen doctors around the state licensed to prescribe CBD and said it has proven exceptionally effective at treating children with epilepsy.

“This is legitimate medicine, and particularly in the world of epilepsy, it can be exceptionally effective for a small group of kids who try it, and it turns out to be extremely safe,” Keough said.

Initially, when Keough first saw media reports about CBD touting it as a magic cure-all drug that could completely erase seizures for epilepsy patients, she was skeptical. In her career as a neurologist, Keough said, it is common to see a drug touted as a miracle cure, then see its claims discredited.

But the research eventually caught up to elevate CBD above the level of a craze, she said. In 2018, the U.S. Food and Drug Administration approved a CBD medication for the first time for patients with certain types of acute epilepsy. The drug, Epidiolex contains no THC.

Terri Carriker’s daughter, Catherine, treats her intractable epilepsy with both Epidiolex and CBD prescribed through the Compassionate Use Program. Catherine, 16, has dealt with frequent, chronic seizures throughout her life and is in a “much better place,” according to her mother, since starting on the CBD medications.

Carriker advocated for HB 3703’s passage and hopes to see lawmakers continue pushing for the expansion of CBD’s medicinal use.

“The next battle is getting legislators educated in some of the up-and-coming research,” she said.

Unlike studies of epileptic patients, there is no clinical research that shows CBD is an effective treatment for achy joints, insomnia, or other afflictions that over-the-counter products claim to treat.

However, Dr. Georgeanne Freeman said she has seen such an “overwhelming preponderance” of patients at her family medicine practice, Downtown Doctor, who tell her CBD has worked for them that she is convinced it has at least some benefit.

However, even if the benefits of CBD are widely accepted, there is no federal or state regulation to prove every product claiming to be hemp-derived CBD contains exactly the ingredients it claims. That puts the onus on consumers and retailers to vet products.

Niki Nash is the packaging manager at Wheatsville Co-Op, which offers more than 80 CBD products and requires CBD companies to provide a certificate of analysis, which breaks down each chemical compound in the product.

“I want to make sure we can stand behind everything we have in the store,” Nash said. “It is kind of like the Wild West out there in CBD.”

That trust from consumers is also critical for Peoples Pharmacy, which has offered CBD products as far back as 2016, according to wellness specialist Lindsey Wilder Flatt.

“We’ve been one of the standbys for a lot of people. A lot of people trust us for our knowledge because we’ve been working with the products for so long,” Wilder Flatt said.

HB 1325 will bring more regulations into the CBD market by requiring licenses for growers, registrations for retail stores and labeling requirements for products, according to Coleman Hemphill, the president of the Texas Hemp Industries Association, who praised the bill for the jobs it will bring and the consumer protections.

While many in the medical and retail fields see the two laws as steps forward, they say the lack of research on CBD hampers both doctors, who want more information to best help their patients, and vendors, who want to help customers find the best supplements to fit their needs.

“There’s no funding through the state at all. There’s no structure for research through the state. That’s what we need,” Keough said. “On a federal level or on a state level, we just need more funding and more opportunity and less restriction on research so that we can understand.”
SHARE THIS STORY