Samsung added two parcels of land to its plant site since the company announced it was coming to Taylor last year. (Courtesy Samsung)

Editor's note: This story has been updated to reflect the total cost of the Samsung plant is $17 billion. The image for the story has also been changed to better show the Samsung site.

City Manager Brian LaBorde said Samsung purchased this land after the company and Gov. Greg Abbott announced Samsung would be building the Taylor facility in November 2021.

“The closing of these last remaining properties didn’t get done in time, but they were always intended for the zone,” LaBorde said.

The additional properties, located in the northeast and southeast portion of Samsung’s campus, bring the total area for the two TIRZs to 1,268.23 acres, according to city documents. One TIRZ covers personal property in the zone, while the other covers real property, LaBorde said. 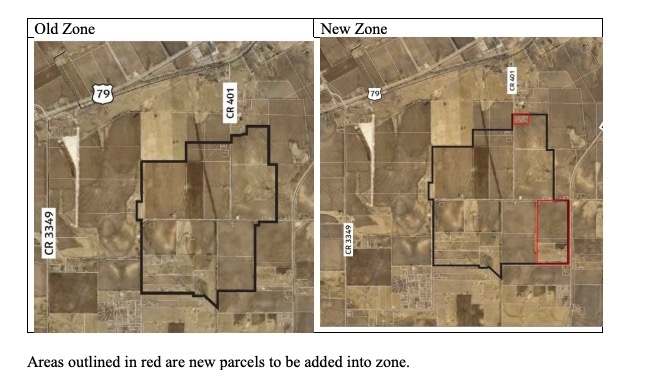 However, LaBorde said expanding the TIRZ boundary does not extend the existing tax abatements for Sansung to these properties. The modified abatements will come before council in late August for consideration, he said.

The $17 billion, 6 million-square-foot mega plant is expected to bring 1,800 jobs to Williamson County. Samsung’s site is located south of Hwy. 79 and west of FM 973, southwest of downtown near Taylor High School.

LaBorde said the amended agreements cleaned up and clarified language in documents previously approved by City Council in October.

“This is a very complex, a very fluid project; it’s the biggest one in the nation,” LaBorde said. “There’s going to be some uncertainty on both sides until we start to get some understanding and clarity.”

Of the new agreements, one was a new Chapter 380 agreement, which LaBorde said is a revenue-sharing agreement that takes advantage of use tax on Samsung’s site. The other, a donation agreement, codifies Samsung’s escrow responsibility for infrastructure information, LaBorde said.

“These are future dollars that will be generated by the project that will then be reinvested back into the project so that it will move forward,” Thomas said.

Council Member Dwayne Ariola voted against each of the items related to Samsung on July 14. Ariola said the action taken by City Council on July 14 was nothing new, but codified what the city and Samsung had previously agreed upon in November.

“I welcome Samsung, but it’s a two-way street and a two-way partnership in my opinion,” Ariola said. “I don’t think we should be paying for this out of our pocket nor should the EDC be paying for it.”

The city of Taylor, Williamson County and Taylor ISD all have economic agreements in place regarding Samsung’s development, which includes more than $6 billion in infrastructure, land and building costs and $11 billion in personal property.