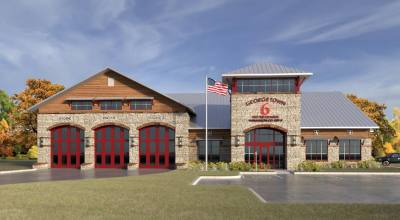 Preliminary plans for Georgetown's Fire Station No. 6 include a facility about 11,000 square feet in size with three garage bays for firefighting vehicles.

As Georgetown's population grows, so does the city's need for more fire protection.

The City Council voted unanimously Tuesday to approve a $478,400 contract with College Station-based Brown Reynolds Watford Architects for design, construction oversight, commissioning and project assessment for the city's future Fire Station No. 7. It is one of two new fire stations anticipated to be built before the end of 2019.

Fire Station No. 7, which is expected to be about 12,000 square feet in size, will be located near the intersection of Hwy. 29 and Inner Loop in Georgetown. The city is in the process of buying land for the station's construction.

Brown Reynolds Watford will be responsible for developing a schematic design for the station, which must be approved by the council. The firm will also create architectural drawings, solicit input from various stakeholders and report any budget changes to city staff, according to the agreement.

The contract will be funded with certificates of obligation, which are expected to be issued this spring, according to the city. The funding arrangement was approved by the council as part of the city’s budget for fiscal year 2017-18.

Meanwhile, construction on the city's Fire Station No. 6, located at 6700 Williams Drive, Georgetown, is expected to begin this summer.


The station’s construction is funded by Williamson County Emergency Services District No. 8, but the Georgetown Fire Department will staff the station to provide emergency services to people and businesses in ESD 8 and the city.

Eric Johnson, the city's capital improvement projects manager, said Fire Station No. 6 will include a community room and a treatment area. Brown Reynolds Watford is also completing the design for the station, which is expected to be about 11,000 square feet in size. The design should be finalized by summer, Johnson said.

Brown Reynolds Watford has prior experience designing fire stations in Texas, including Leander’s Fire Station No. 4. The company has also worked on educational and municipal projects.
SHARE THIS STORY

Unofficial complaints from residents generally increase after storms such as the recent April hail storm, and leaders are looking at ways to protect residents.

Catch these 15 Georgetown events, activities happening in July and August

Plays, a back-to-school bash, live music and more are happening over the next month.

Physical therapy practice in Georgetown gets innovative with treatments

Just 20 minutes of using the ARP Wave laser treatment is equivalent to lifting heavy weights in the gym for an hour.

Williamson County judge: It is ‘not the plan’ to return to COVID-19 lockdowns

Williamson County Judge Bill Gravell at a July 20 public meeting said he has no plans to implement restrictions to mitigate the spread of the coronavirus. According to the WCCHD coronavirus dashboard, the rate of new infections across Williamson County doubled from July 11-18.